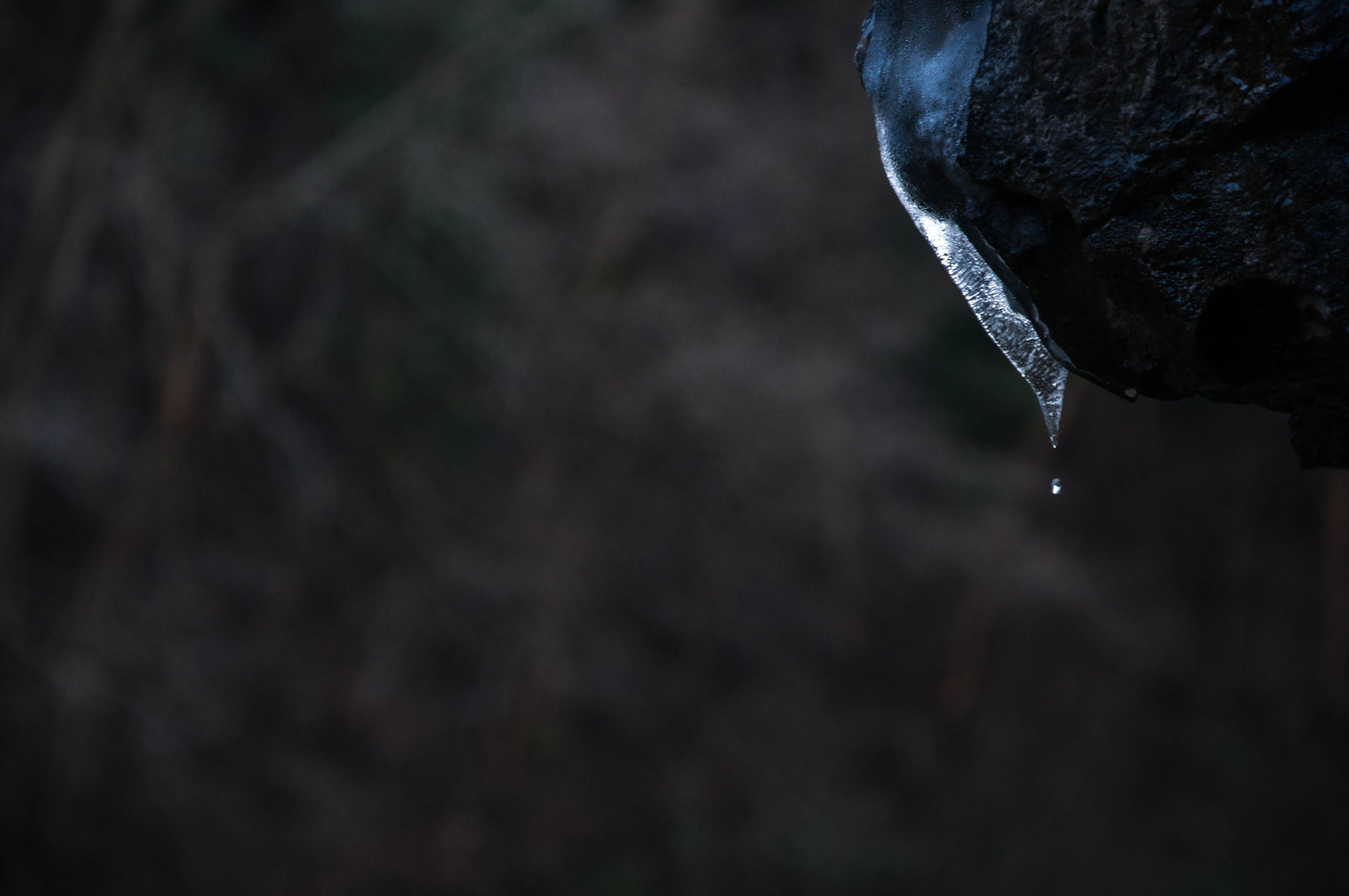 Melt drips from an icicle in Cheddar Gorge

This is an explanation for all those people who say: ‘You’re always going on holiday,’ and: ‘How do you afford it all?’

I think our holidays are not the same! This is a trip not a holiday.

The ‘trips’ usually start off the same – late and in a rush as we grab everything we need and run to the van to throw it all in the back.

It’s James Pymn’s turn to drive so we are in his small Transit van with a single mattress in the back and a foot-well full of old sandwich packets and a half eaten KFC.

The van is now packed (we hope) and we are off – this time – with everything we need and the drive goes smoothly right up to the top of Cheddar Gorge – our destination this time. We pass the two hour drive with general babble and skipping the radio stations ‘til we find ‘actual’ music and failing that use up all of Pymn’s allotted 3g listening to ‘Uptown funk you up, uptown funk you up…’
As we arrive the Gorge is completely in the shade and it looks cold!

Driving down past the frosty verges you can feel the temperature drop in the van, but the excitement building as we see the rock we are going to climb numbs us to the cold.

As we park and get out of the van the excitement passes and the regret begins. As we walk up to ‘The Wave’ – the crag we are headed to – we do a calculation on which way is north ­– ‘does that mean we will get any sun?’

We worked out no!

It was not going to get any warmer so we resorted to boiling up a round of teas and got to climbing.
On a day like this keeping warm while belaying is very important as otherwise it will ruin your next climb, so we have on our thermals, t-shirts, down jackets and hard shells. 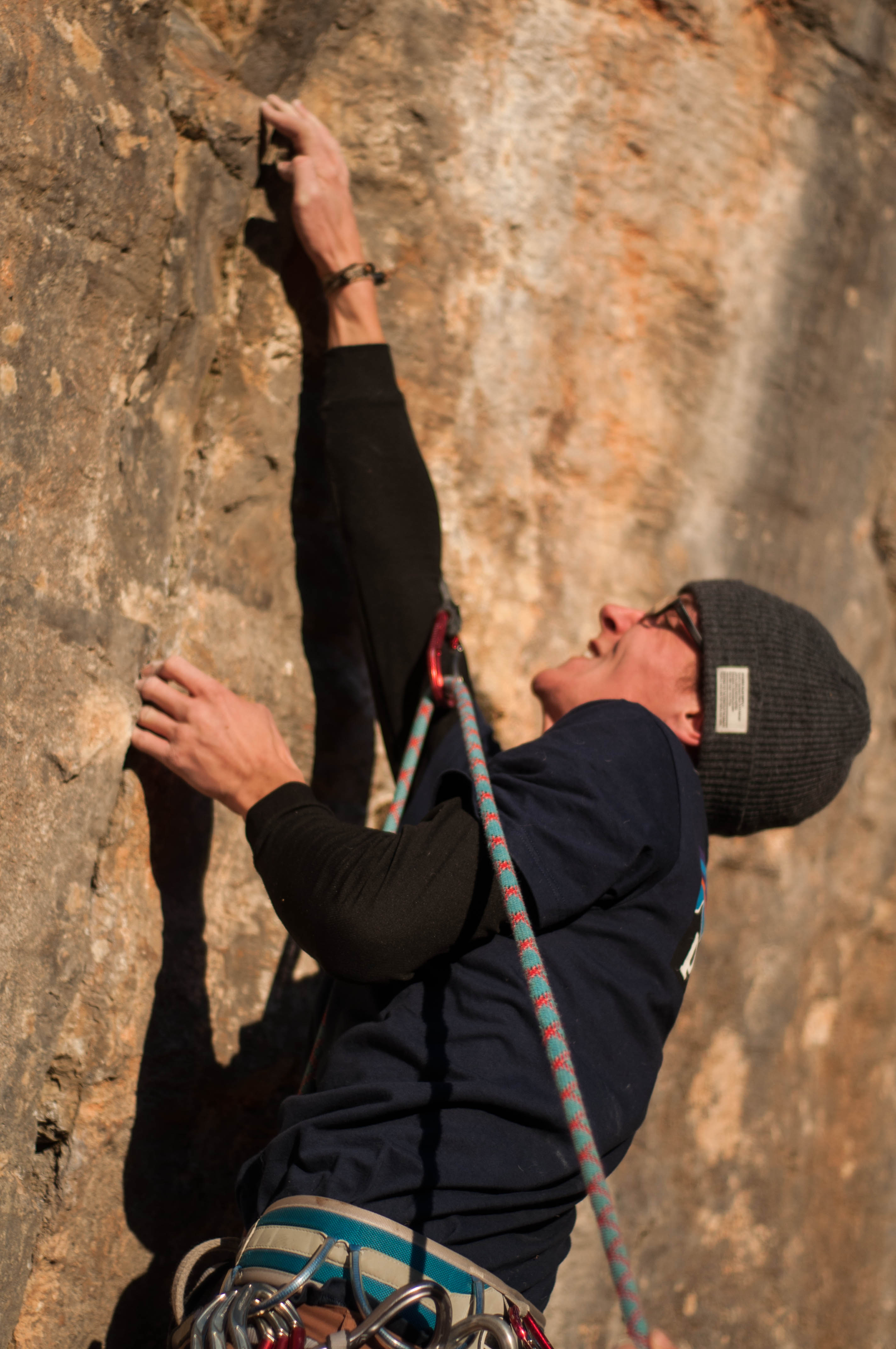 Sam tentatively makes his way up a testing finger crack

There are 2 main problems with climbing in such temperatures – your feet and hands. As soon as you take your socks off to put your freezing cold, hard rubber-soled climbing shoes on, instantly your feet are numb. Pymn did attempt to work around this problem the following day by heating his shoes up on a portable camping stove until he burnt one of his Tenaya rock boots (around £100) – whoops!

So you now have frozen feet ready to try and stand your body weight on your toes on an edge no bigger than a pencil tip, next is placing your hands on the rock which hasn’t seen above zero degree temperatures for god knows how long. It’s like that beer you find right at the back of the fridge which is half frozen – you hold it for a minute and then figure out ‘shit now my hands are numb!’ Great start!

So you start by pulling your way up a warm up climb – in name only –without being able to feel your feet or hands, but it’s fine, it’s Pymn’s go now and I can get my layers back on. It doesn’t take long for your hands to warm up and defrost but I’m not going to lie, your feet struggle all day long. Tightly packed into restrictive shoes which disrupt the blood supply at the best of times can be, in these temperatures, close to torture.

Thankfully our calculations were slightly wrong and the sun had spun round to face us which was great as it meant that the ice on the route we had our eyes on next, ‘Raw Deal’ (7a) was melting off and we could have a go.

We were now joined by Angus who came up to meet us but not to climb as he’d mangled his knee something proper while speed-riding in the Alps.

The ice melted – in places – and we worked ‘Raw Deal’ and got the climb clean and then starting playing on something a bit harder.

But it is late-December and the days are short. With the sun now disappearing and light fading we decide to find camp. First we head to the pub to get a cold pint in us, I have no idea why we get a cold beer but this is what happens, force of habit.

We leave the pub colder than when we entered and it is now pitch black. At five o’clock! 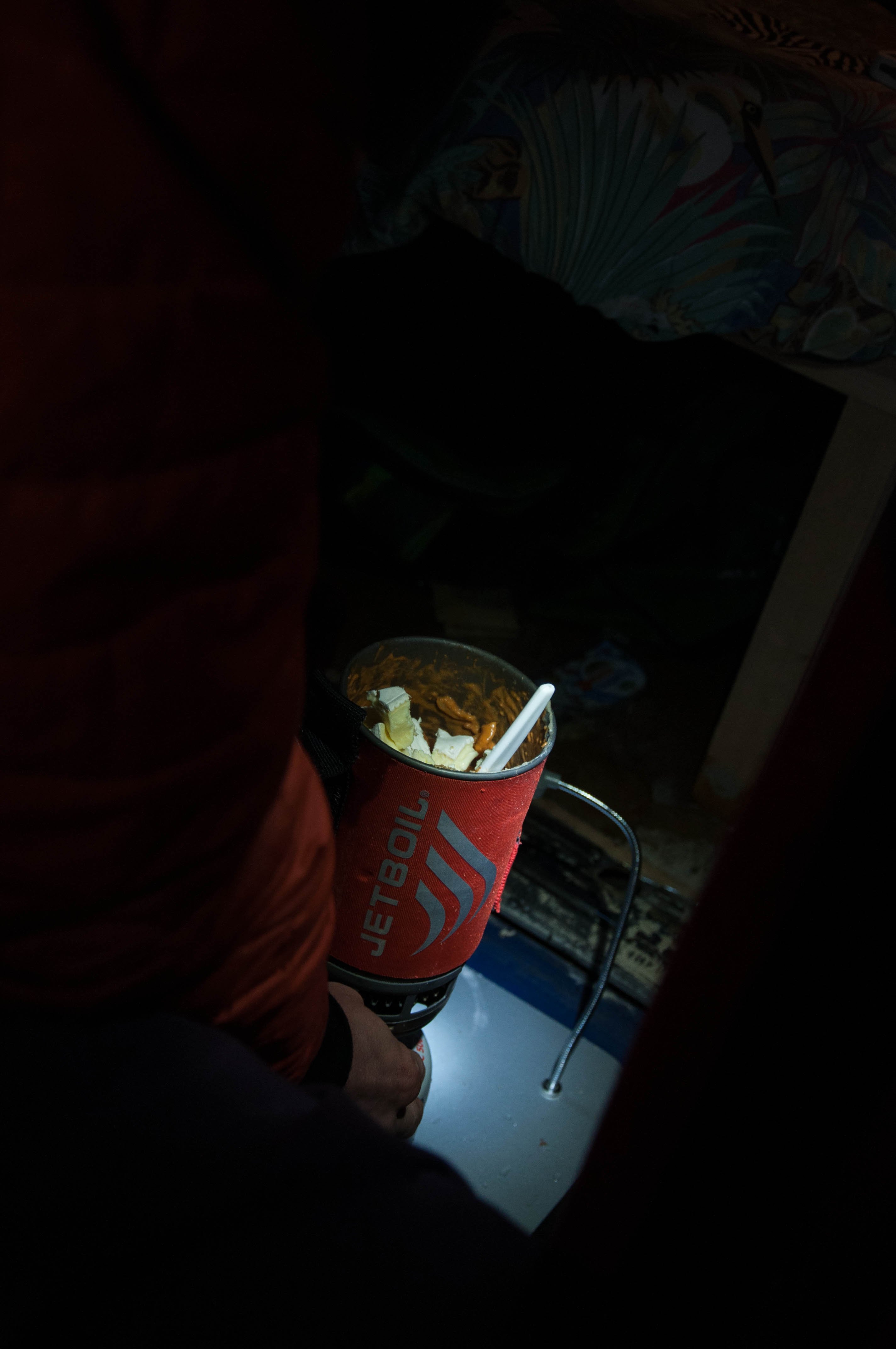 Chef Pymn doing his thing with a Jetboil

Time for dinner set up in between Pymn’s side door and Angus’s rear door of his van. It’s a typical meal of plentiful stodgy pasta packed with cheese and some salad, this time with Angus with us he brings some fancy feta cheese in oil.

I always forget why we don’t have fancy foods like this… it’s because being in two vans without a proper table to put things like that down on, everything ends up on the mattress you will be sleeping on. And yes, you guessed it, the oil tipped out and the manic rush of trying to find something to clean it up with starts, it ends fast with Pymn finding a smart waistcoat and mopping it up? No idea why that is in his van but you just don’t ask with Pymn.

After eating up our fuel for the next day and sitting around chatting we are pretty tired of fighting the cold so we all pile into Pymn’s van, close the doors to the mountain of washing up outside and try to get warm(er). Being as it is 7.30pm and now the temperature must be below freezing we are all full clothed and in our sleeping bags sat using up the rest of the 3G. By nine o’clock the phone batteries are dead and so are ours, so we call it a night.

We wake up in a car park overlooking Cheddar village – we always seem to land on our feet with incredible views to awake to – scrape the frost from the car, clean our mess from the night before and cook up some boiled eggs. 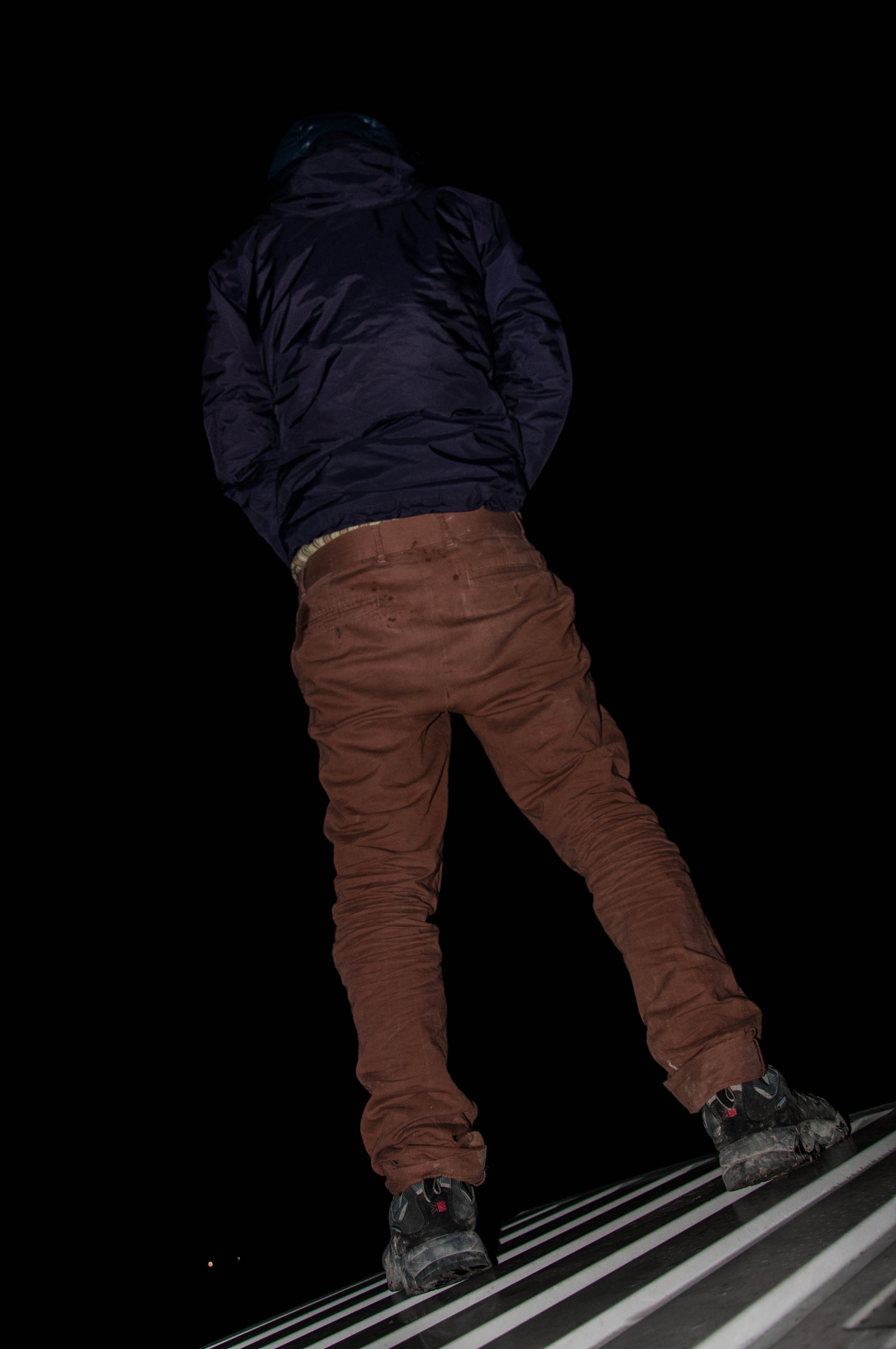 Sam makes use of the 5* facilities on offer

We head back to the crag for what starts off to be another freezing day in the Gorge, we begin climbing on a higher tier so in theory we will get the sun and then move on, again I don’t think our calculation was quite right and by the time the sun reaches us we are packing up and moving down a tier for a climb up and out of a cave.

The route looks awesome and we drag Angus up the path with his messed up leg to get a closer view. As we get closer we realise the route looks wet and as we get there we see it has ice hanging from most parts of the roof of the climb. We head back to ‘The Wave’ and tried some more routes ’til the light was dropping.

The previous day and the cold night were taking their toll on our energy levels and it was still incredibly cold so we decided to throw the towel in.

Pymn and I got back in the freezing cold van, wacked up the heating and channel hopped until we found something groovy enough to boogie our way home to. Happy, content, finally warm and tired we make our way back home just in time to wash, eat and sleep ready for work the next day.

The trip itself feels like it is trying to defeat you most of the time what with the cold, the lack of comfort, muscle strain, cuts and bruises. But still all the way back we figure out where we can go next weekend.