Luck on the moor – Dartmoor February ’15

Luck on the moor – Dartmoor February ’15

Late one cold Friday in February while the gritters are out de-icing the roads, Sam and Tom decide to head – totally clueless – to Dartmoor. 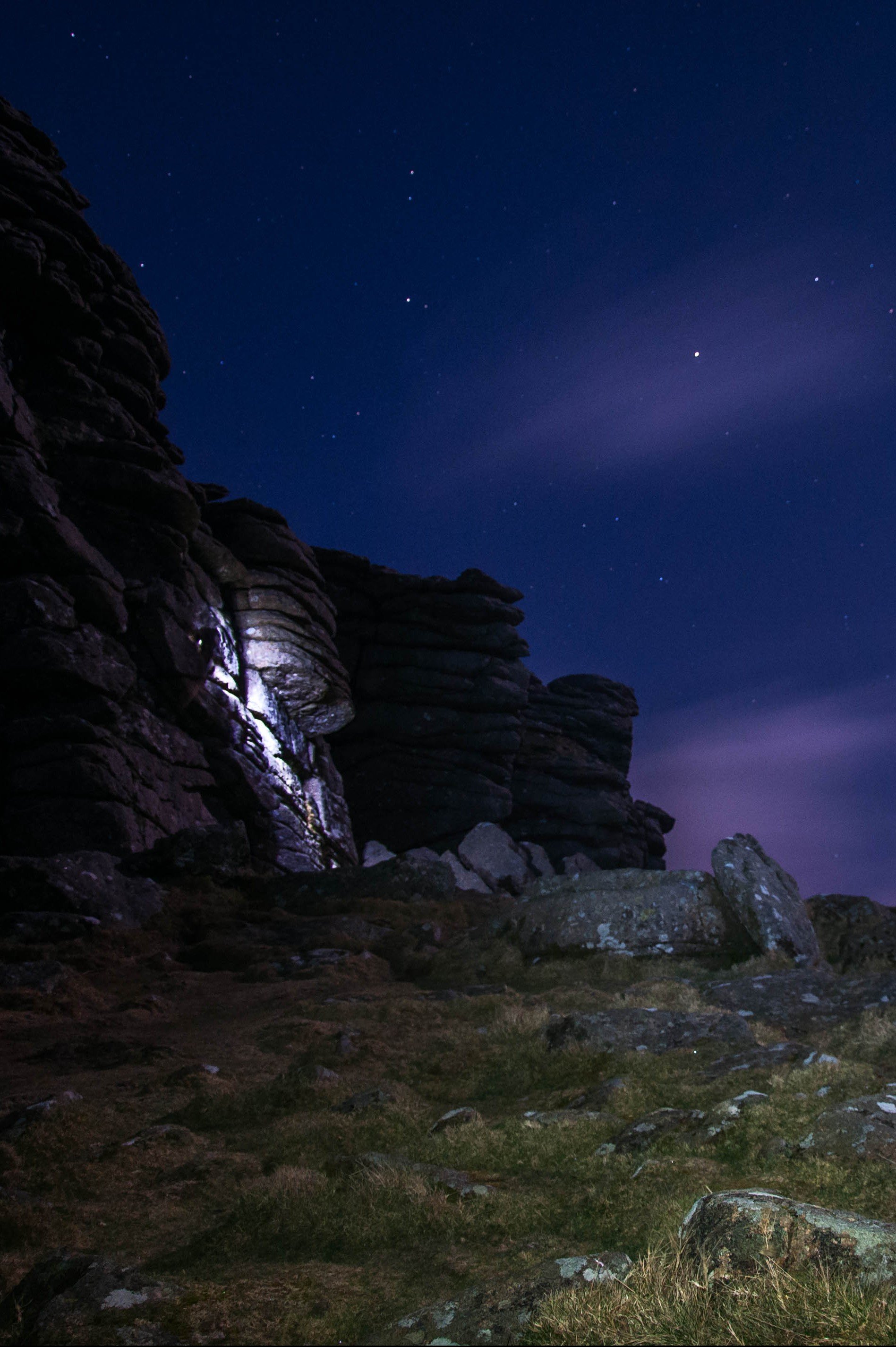 As we pull up in the car park shortly after midnight, the fatigue of a week’s work and stress of finding the place using only the basic instructions in the guidebook all melt as we stare up a short hill at the stunning rock that lies at the top – Hound Tor.

The excitement is palpable but neither of us speaks apart from one-word expressions of amazement. The sky is clear apart from some wispy smears of cloud and the Tor is shrouded in a dark blue light, standing out against the moonlit sky.

We put on our layers and walk up the slope past patches of snow to uncover what lies waiting for us this weekend. We were both Dartmoor virgins so had little idea of what lay ahead.

The setting is incredible, it feels like some sort of collapsed ancient monument, each tower formed in a previous time, unaware of the wonder it would hold to the climbers of the future. The moonlight is bright and casts amazing contrasts on the faces, every crack stands out black against the speckled grey of the rock which in turn stands out against the deep blue of the sky.

I just can’t help myself. I walk up to the rock pulled intrigued by its appearance. My hands explore the contours of the boulders and the next thing I am aware of is scaling the face in my loose trainers.

Sam meanwhile is still further down the slope, taking in the incredible landscape through the lens of his camera. Both of us are in awe – both of the rock and our luck.

Luck was the defining feature of this trip as we were to find out. We make our way back to the car and make a bed of sorts in the back of Sam’s estate and have a night cap – excitement keeps us from sleep. 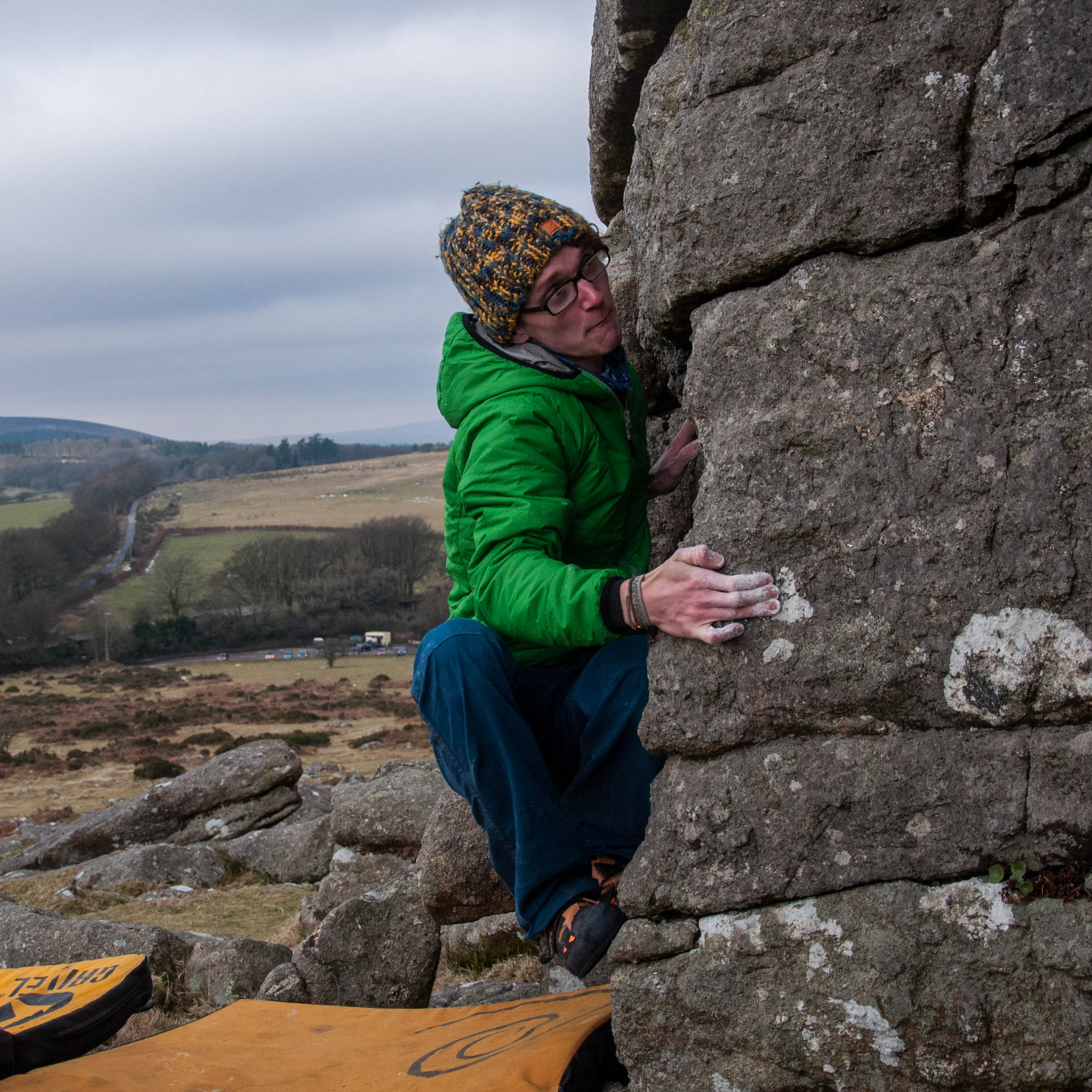 Sam warming up on some of Hound Tor’s stunning granite boulders.

We wake the following morning after patchy sleep and admire our ability to – purely by chance – find incredible views to wake up to, Hound Tor looks equally beautiful in the morning light.

Stove on, kettle on, coffee brewing.

After a hearty breakfast of a mammoth portion of porridge and raisins shared from the aluminium pan it was cooked in we grab pads, chalk and shoes and make our way back up the hill in the crisp morning air.

We instantly feel like the proverbial kids in candy shops and are spoiled for choice for warm-up (or de-frost) routes – all of which are incredible fun; hand jamming up short cracks, slapping up sloperey arêtes and utilising the sharp crimps set into the granite. 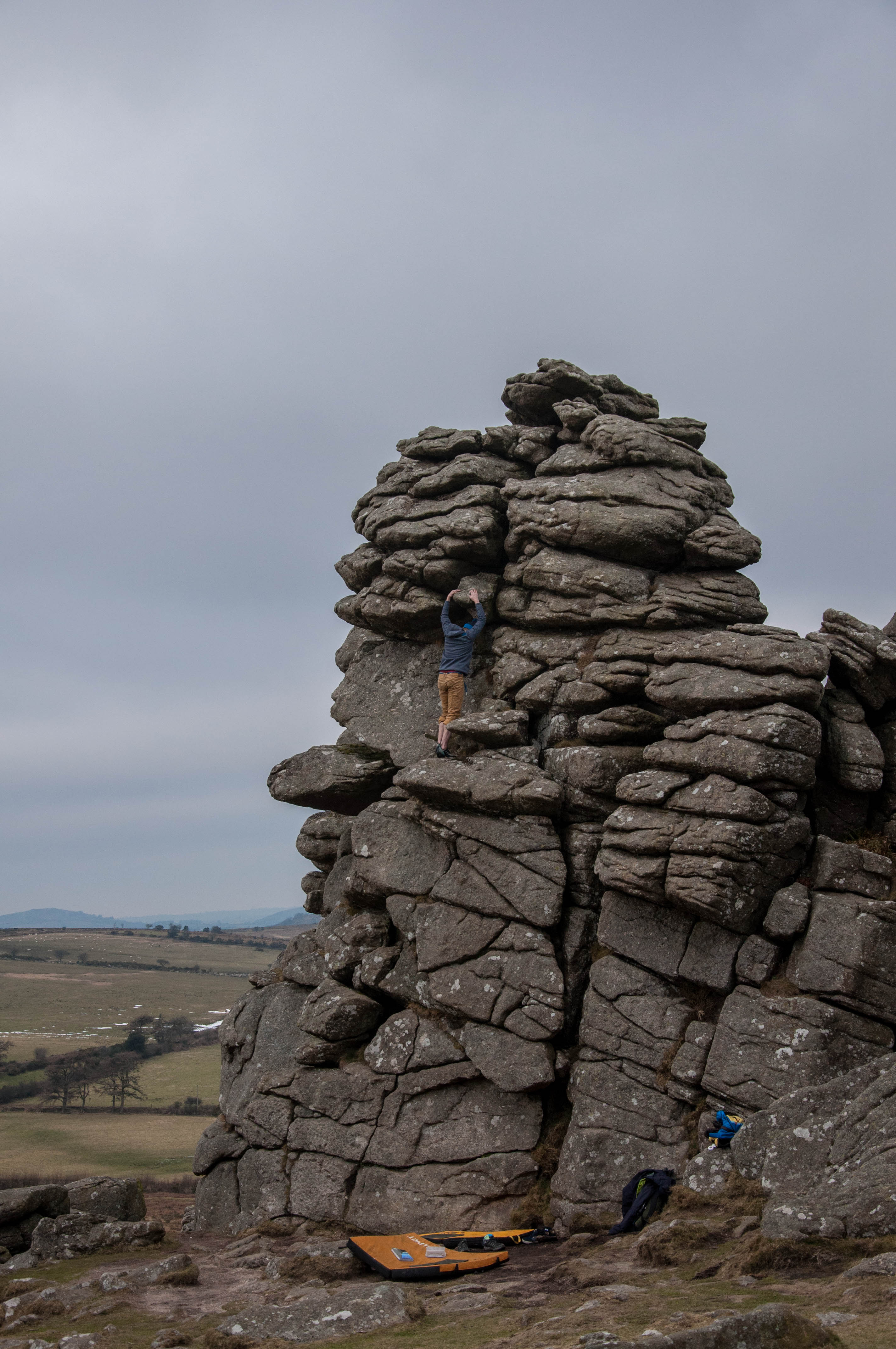 After soloing some straightforward trad routes and creating some interesting problems to familiarise ourselves with the rock, we decide to abandon our ambitious plan to walk across the moor to Haytor and head back the car for lunch and then drive to the few miles instead.

Despite the low temperature, scouring wind and overcast skies, a surprising amount of people have also decided to visit this stunning landscape; sometimes I forget it’s not just the people who want to go straight up the faces that enjoy these places.

We get a cup of tea from the optimistic ice-cream man and sit in the car deciding what to do. With no real idea of what there was to climb on Dartmoor and no desire to solo (due to no gear) in front of a large crowd we were at a loss.

At just that moment, a mountaineering club pull into the car park in a minibus full of brightly Gore-Tex’d and bushy tailed climbers.

After they pile out we shuffle over and instantly we recognise each other’s familiar uniforms of good layering and bits of metal hanging from backpacks.

Check out all the photos from the weekend here.

They fetch the local sage from their group and he comes forward to point us in the direction of Bonehill Rocks. Using our ‘local knowledge’ – amassed from getting lost on the moor the previous night – and his OS map we think we know how to get there. Another bit of luck. 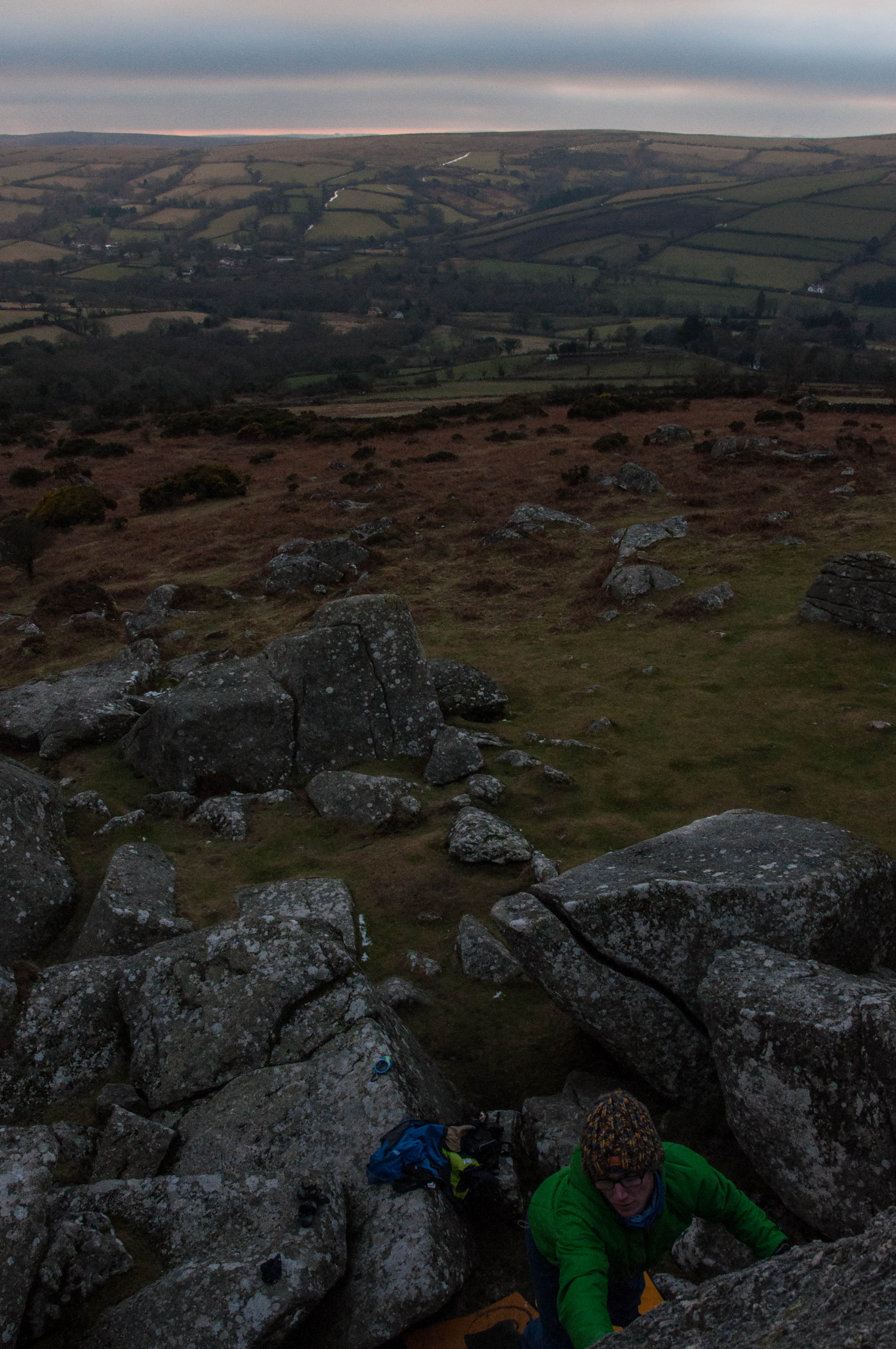 Sam works his way up the high-ball slab at Bonehill while Tom enjoys the scenery.

Likely due to luck, we find the place.

Feeling reclusive and wanting to climb harder than the morning, Bonehill Rocks was perfect. Set back from the more busy Tors, it is a collection of smaller towers and scattered boulders: a climber’s playground.

There were so many interesting problems here – too many for one afternoon – but after a quick jog about to warm up we set about crushing.

Both Sam and my favourite piece of rock at Bonehill was undoubtedly a high-ball slab we found. We first tried it straight up a large crack, foot and hand-jamming up the gap was a dream. We then made our way up a smaller crack and then set about eliminating holds and enforcing silly rules to make it more challenging.

The place was immense – beautiful grey granite boulders set against the reds and greens of the moorland stretching off into the distance behind confirmed that we had come to the right place this weekend. Standing on top of each conquered boulder and seeing the setting was never getting old.

Tired hands and hungry bellies meant we called it a day.

After a pint, pie and mash in a good pub we find a quiet car park, get comfy and fell asleep quickly; it was a long day.

We wake up to a bright, frosty morning and repeat the previous day’s morning routine just a little earlier and with a little more ache in the joints.

The plan was to head to Haytor early to avoid the crowds and get some little solos in to start the day. We stuck to it and the early start paid off, only a few other early risers walking dogs kept us company on the frosty moor. 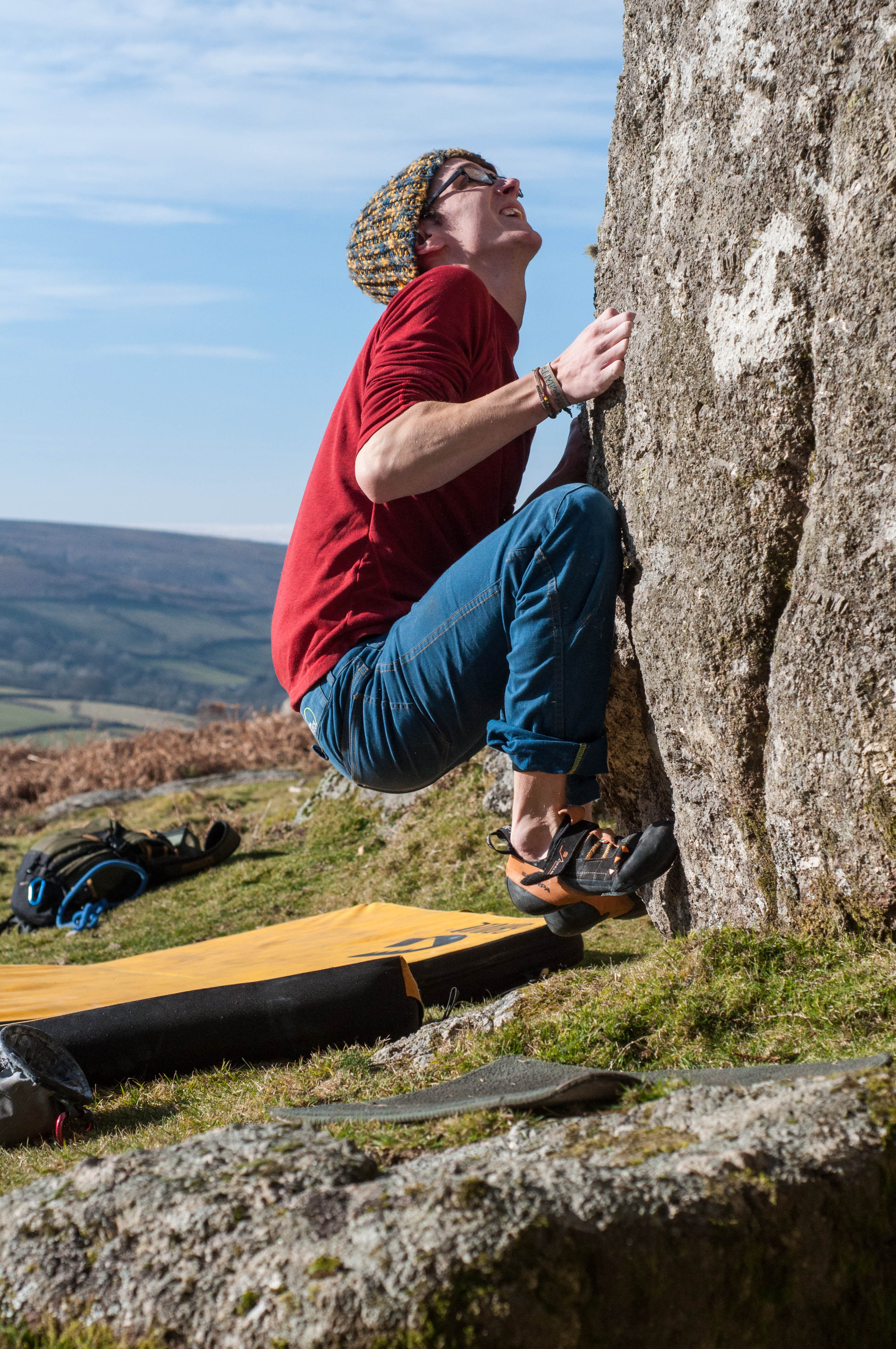 Sam crushing the sit start to The Ball at Easdon Tor.

Slipping into icy cold climbing shoes we set about tackling three 16 metre routes on the South face of Haytor. What a way to wake up, the sun begins to shine as we conquer the rock and the feeling of being completely in the hands of your own ability is meditative.

After locating our over-excited canine companion, who had made her best attempt at joining us on the climbs, we walked about the two outcrops of Haytor and after backing out of soloing a ballsy roof made plans to return with gear on our next trip.

From the top of Haytor we’d spotted what looked like public conveniences a little way down the road so necessity took us back to the car and down to the toilets.

More luck. As it turns out the toilet is just an annexe on the tourist information centre. Inside Sam asks the tourist info woman if she knows anything about climbing on Dartmoor to which she replies with an air of unfamiliarity “Do you do ‘bouldering’?”

She provides us with a tourist magazine in which, after a double page spread about disabled ramblers, was a ‘Ten best boulder problems on Dartmoor’, which coupled with a dodgy map in another magazine leads us to Easdon Tor. 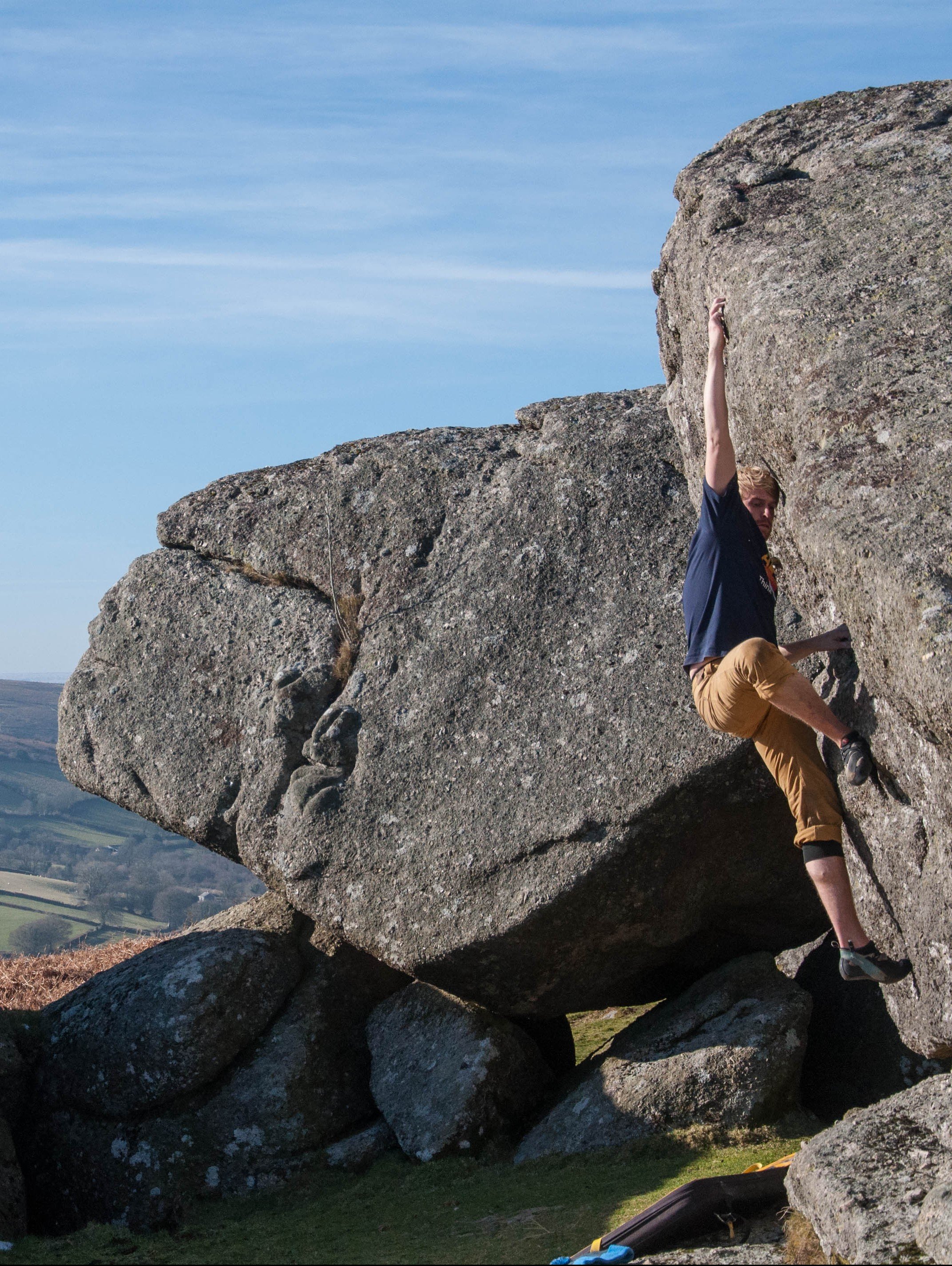 Tom reaches for the top shortly before his knee popped.

After getting a little lost among the back-roads, which in the beautiful sun was not all bad news, we manage to wind up a track towards our destination. An elderly couple give us some friendly parking advice and we set off up the hill.

Perfectly sheltered from the wind by the crest of the hill, Easdon rocks was a little bit of paradise. The sun beamed down on us as we set about uncovering the gems in this beautiful little crag.

In stark comparison to the previous day we were down to T shirts, and, with no topo, we were limited to previous climbers chalk marks and our own ingenuity. We climbed what we later found out were some of the previously established routes, absolutely stunning lines on clean rock.

The striking boulder of ‘Easdon arête’ was one of the most beautiful of the trip.

After fatigue set in a little and my knee popped we set about creating a tricky top-out problem on a seemingly untouched boulder. After realising that we were fighting a losing battle trying to slap up onto moss and lichen we cleaned the top as best we could with a car foot-mat and our hands and she was ready. 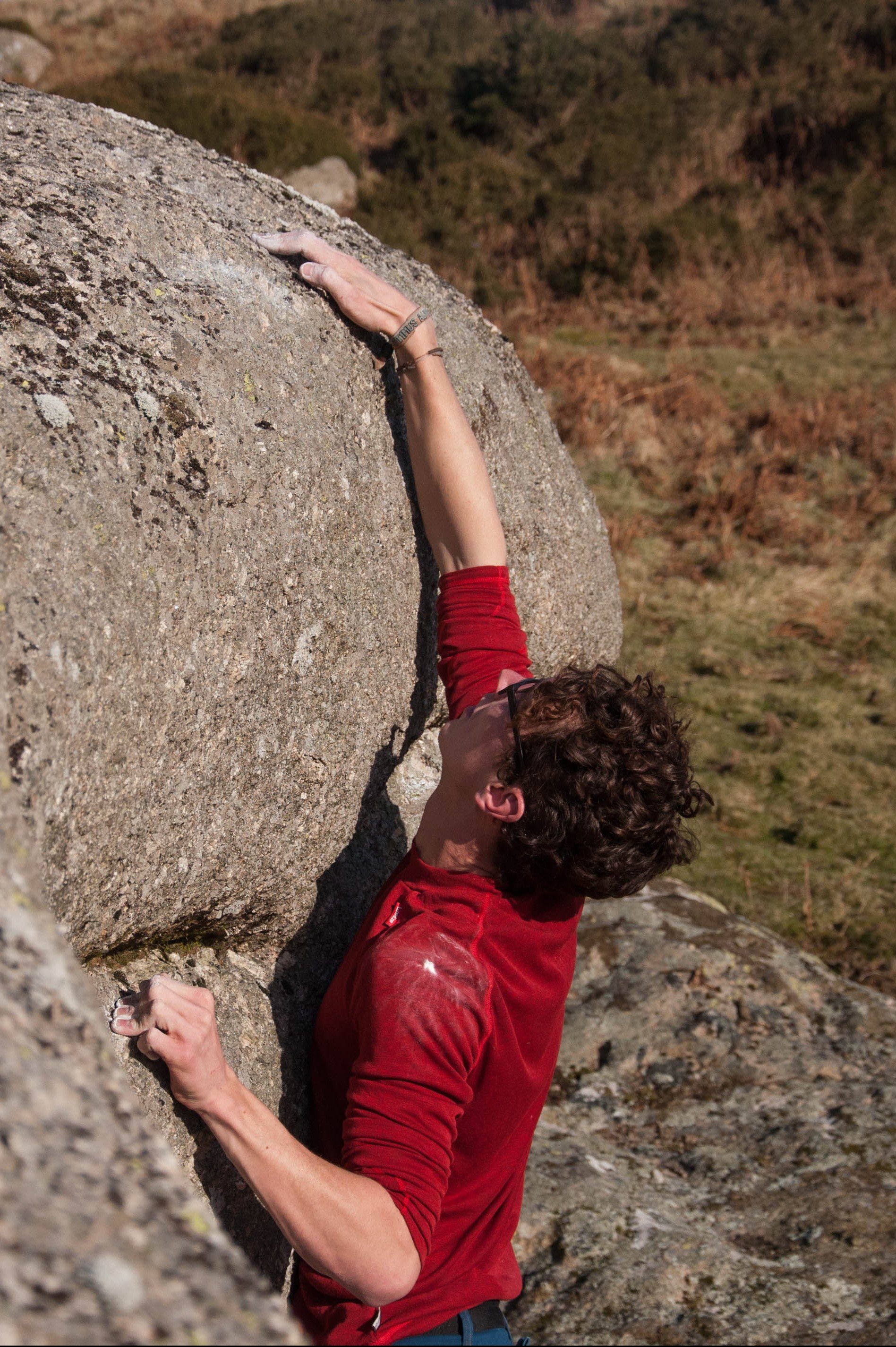 Sam made it up with relative ease after a couple tries and additional cleaning of crucial holds, a master-in-training of the bare top-out boulder, so I was left to battle on.

After being spat off in every direction and removing the skin on my forearms with determination, I sat and had a word with myself and swiftly sent it.

We both agreed that was a fitting end to the trip and before setting off we took in the surroundings one last time.

Sat side-to-side on the bouldering pad with the thousand-yard stare on down the hill and across the moor, trying to put names to the different granite outcrops I can see, I feel complete.

“What a weekend…” is all I can muster.