The last trip to Cheddar Gorge was between Christmas and New Year, it was a tad cold and I’m not going to lie it was hard work.

This trip was different, for me it was just for the day, the sun was out, we nearly had the whole ‘team’ minus Emmie and Tilly and we had brought Seb along.

Seb is someone who Pymn and I went on our first climbing trip to Fontainebleau with. He’s not been climbing much recently but is already killing it again.

He was out for a while due to growing up and some injuries but he’s back fighting off his ‘kebab belly’ – his words not mine – although he is still continuously eating.

As we turned up to The Wave (crag) after being super hyped from attending the Banff film festival in Weymouth the night before, we set our eyes on Raw Deal. 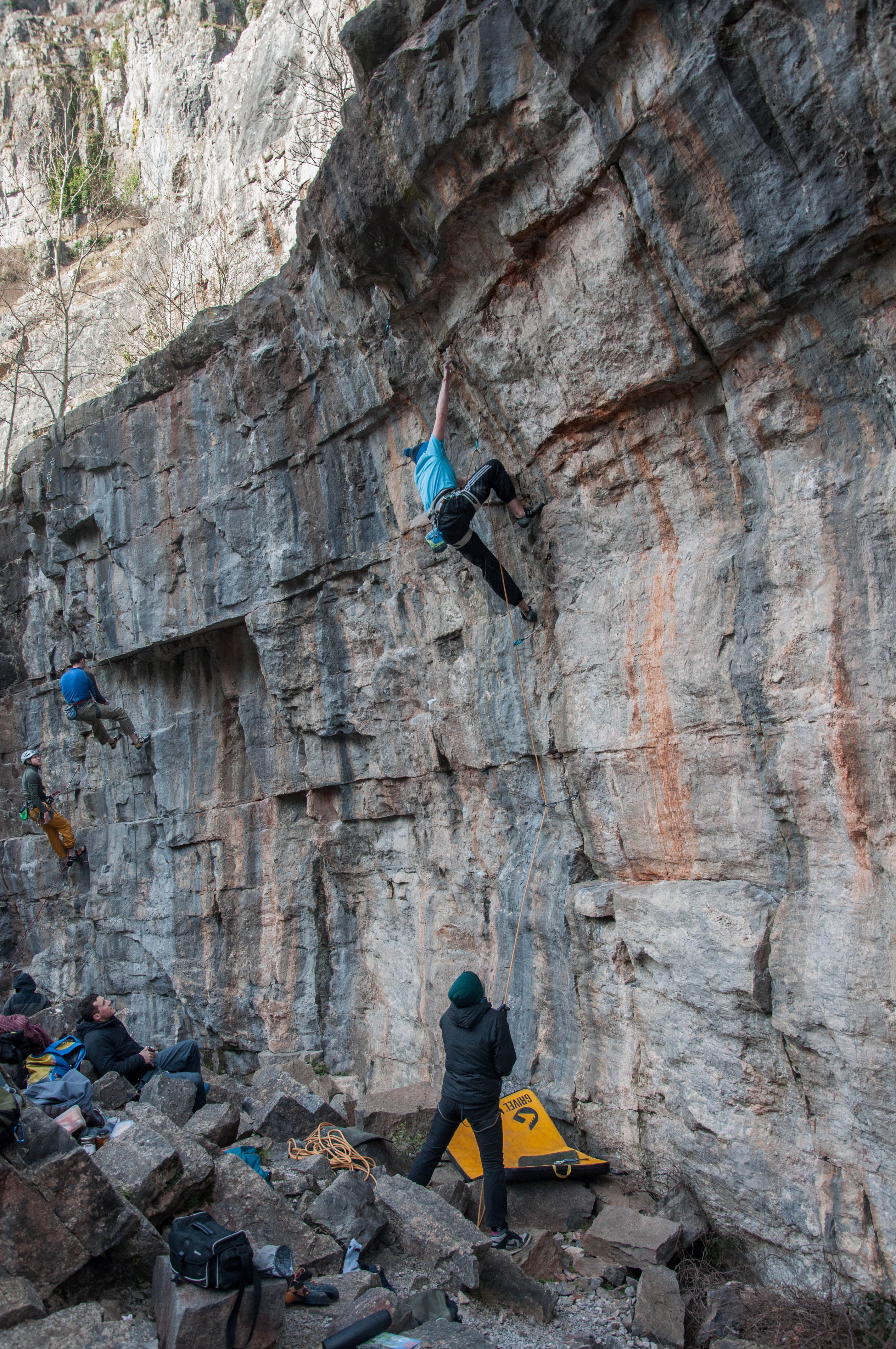 Raw Deal was the climb which I was fighting with over Christmas and with the sun burning its way over the crest of the gorge and the rock still cold and pouring with friction, Angus set off on it.

In not too long Angus, Seb and Tom had lead the route and with my damaged A4 pulley i had top-roped it.

As we finished up Pymn, Connie and Evie turned up with there climber’s breakfast – an ice cream in a cone?!?

Anyway, as he does, Pymn jumps on Raw Deal, smashes it out clean from cold, then returns to his cone which is now just a melted mess.

The sun is now making the lower crag look irresistible so we move down and set up camp.

Unfortunately my finger is the deciding factor on every climb now so Seb and I look for a nice climb without a guide book and jump on it.

Check out all the photos here.

As we start the climb the first bolt seems to keep moving further away and before you know it you’re four meters from the ground, holding on to a flake which feels as solid as the type you would put in your ice cream.

First bolt done and the climb seems to go nicely with a beautiful flow up until the last bolt before the top out. Myself and Seb try it from the ground several times until everyone takes interest, everyone has a go but the top move stumps us all. 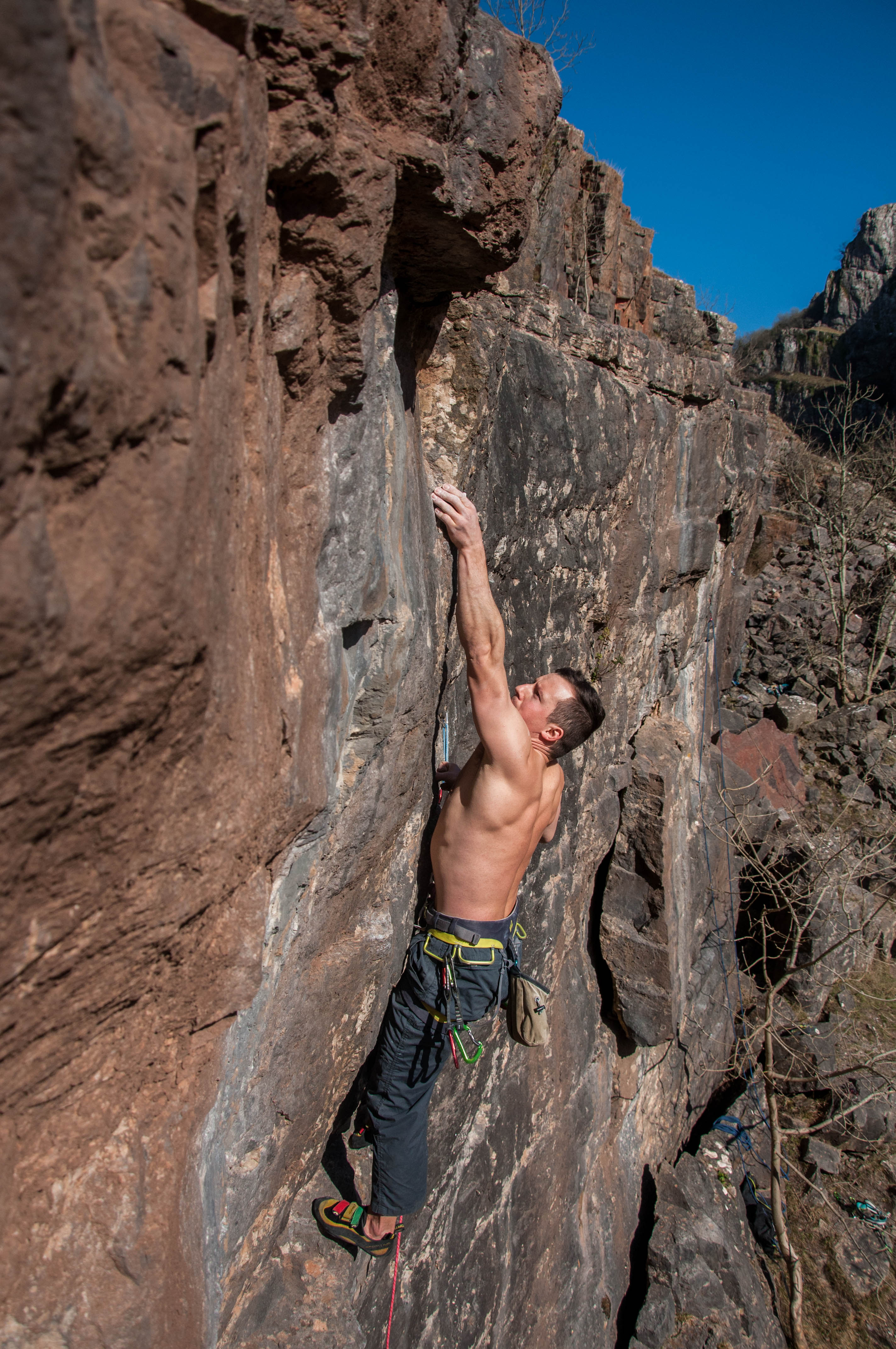 Suns out, guns out!

It is now roasting, we climb a few more on The Wave but my finger has now said no, so I’m more of a spectator/photographer, ascending up the surprisingly tricky ‘The Bloodshed Begins’ which Connie had sent earlier, and taking shots of the guys working what we have now found out is a 7a called ‘Ritual Slaughter’.

It’s time to move on and Angus takes me back to the cave he showed us in December which was covered in ice and wet all over.

This time Angus’s leg is not so messed up so he leads the charge up through the cave on great holds – however someone forgot to add the footholds – and then it swings up and out to a great bit of face climbing with a crack to finish. This climb has it all and Angus shows us how its done – nearly getting it clean on the first attempt.

I follow up through the massive pinches on the amazing flowstone but only seconding due to the digit.

We end the day with the others working some end of the day routes up in the sun. As the best of the sunshine disappears and Seb runs out of cheese and chutney we call it a day.

Even with the mashed finger the Gorge feels easier than last trip (not a holiday!) and we all leave looking forward to the next trip.