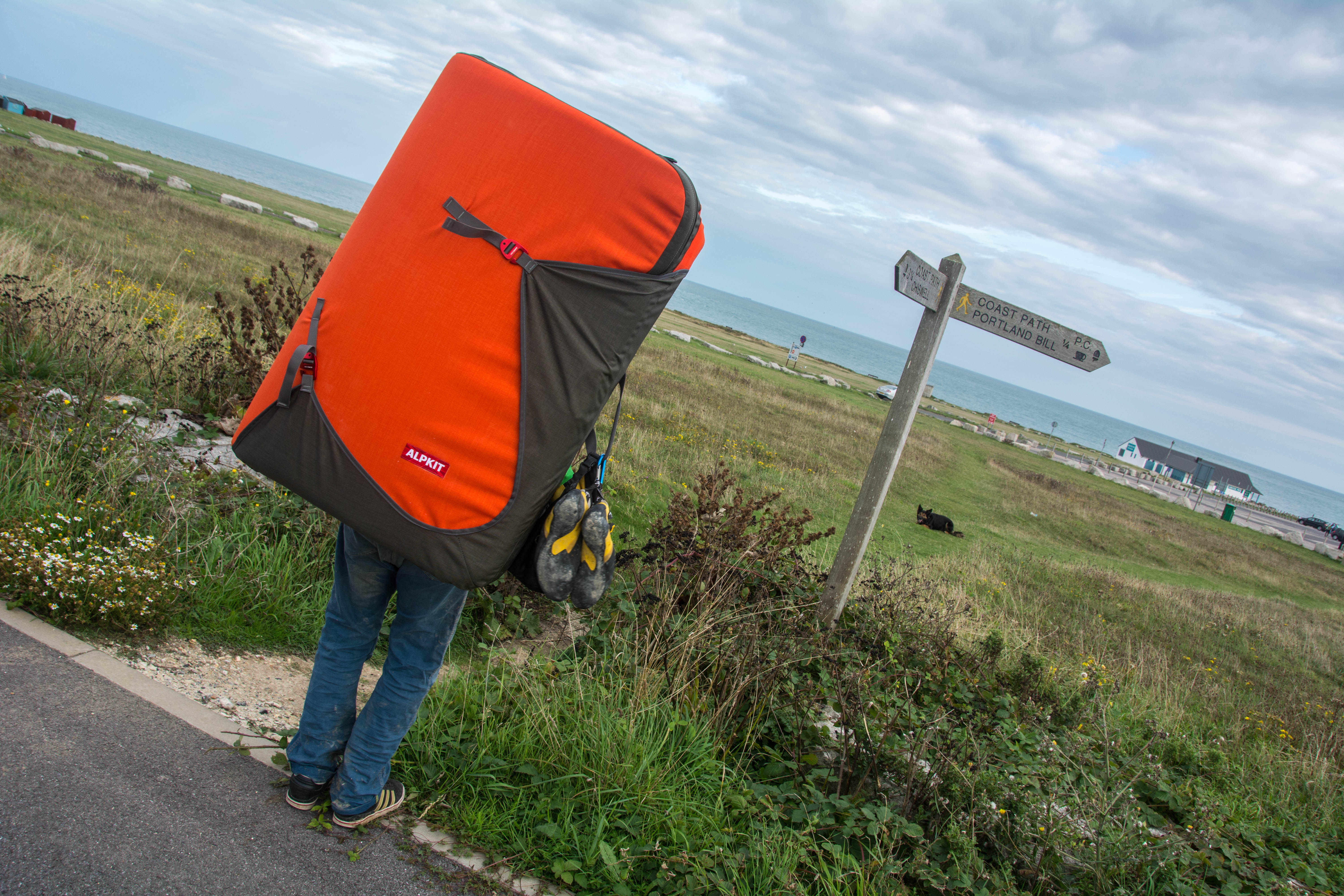 Buying a bouldering pad can be an expensive experience but I have managed to put it off for 5 years. My first bouldering trip was to Fontainebleau in August 2012 with a group of friends one being Seb Lee. Seb had been climbing for a few years at this point and is the kind of guy who has everything you need and anything to borrow. After that first trip, I was hooked…but still without a pad. I ended up using Pymn’s pad a lot as we mainly climb together anyway.

Tom making use of the pad.

When it came to our second trip to Font, Seb was unable to come but offered up all his pads. So we drove by and bundled 2 Alpkit pads (one large and one small) and a DMM highball in Pymn’s van and shot off to Font. After a long drive home, exhausted, it’s hard to find the motivation to unpack so the pads ended up staying in the back of the van a while…

In May 2015 we returned to Font for the 4th time and this time Seb came (although he was injured from his trip to Font only a month before). Along with the mouldy cheese and probably half a bucket of sand from the past couple of years, the pads were still in the back of the van. We had hijacked them and used them pretty hard for the past few years. The highball pad had seen better days with the cover now falling off of it being broken at the zip. The Alpkit pads had kept their shape much better, but with straps breaking and the foam being tired, we decided to get some new ones.

After the long and hard 3 years the Alpkit pad had really impressed me so I decided to get the latest model: the ‘Project’. This pad is the premium bouldering pad from Alpkit and boasts a 1m by 1.4m landing area which is hard to miss- even from the top. You’d even feel secure on a favourite L’Elephant 8 metre highball of ours thanks to the 9.5cm of multi-layered foam. In addition, the foam is now in one piece so you’re not going to twist an ankle falling through the middle.

Sam with the Alpkit Project.

The removable straps from the old pad have been replaced with fully sew on rucksack straps (to prevent the breaking from the old model, I guess) and now has an additional waist strap to help with the comfort on the longer walk-ins. It also has a handy cover which wraps all the way round the bottom so you can now store your guide book and shoes securely.

So that’s all the jargon said and done! I have used the pad a few times and it works… well, I haven’t broken anything yet. Unfortunately, the pad doesn’t fold up as well as the old one due to the one piece of foam. The straps aren’t as comfortable but I think that will improve over time and it’s a shame to lose the strap which can make it in to an over the shoulder strap. Saying all that, it’s a great pad and it’s nice to see that they researched and improved parts which maybe the older one had struggled with. The material feels durable and the wrap round cover works great to hold all of your climbing gear; which means no need for another bag! I have used other pads and so far, I haven’t found one which I would have over this. Although, I look forward to seeing how Alpkit will upgrade this pad to compete with Ocun’s fantastic new zip idea.

Happy with this birthday send of 'Info Freako'. A

@tomisnotdead getting his long man on! • 'Sing S

Not this time.... • @slothrockdirtbag before he

I forgot how good this route is. • @specialseawe

The Cuttings is on! • Last Saturday we spent the

Taken a couple of weekends ago on a beautiful sunn

I had to share this image that my good friend Angu