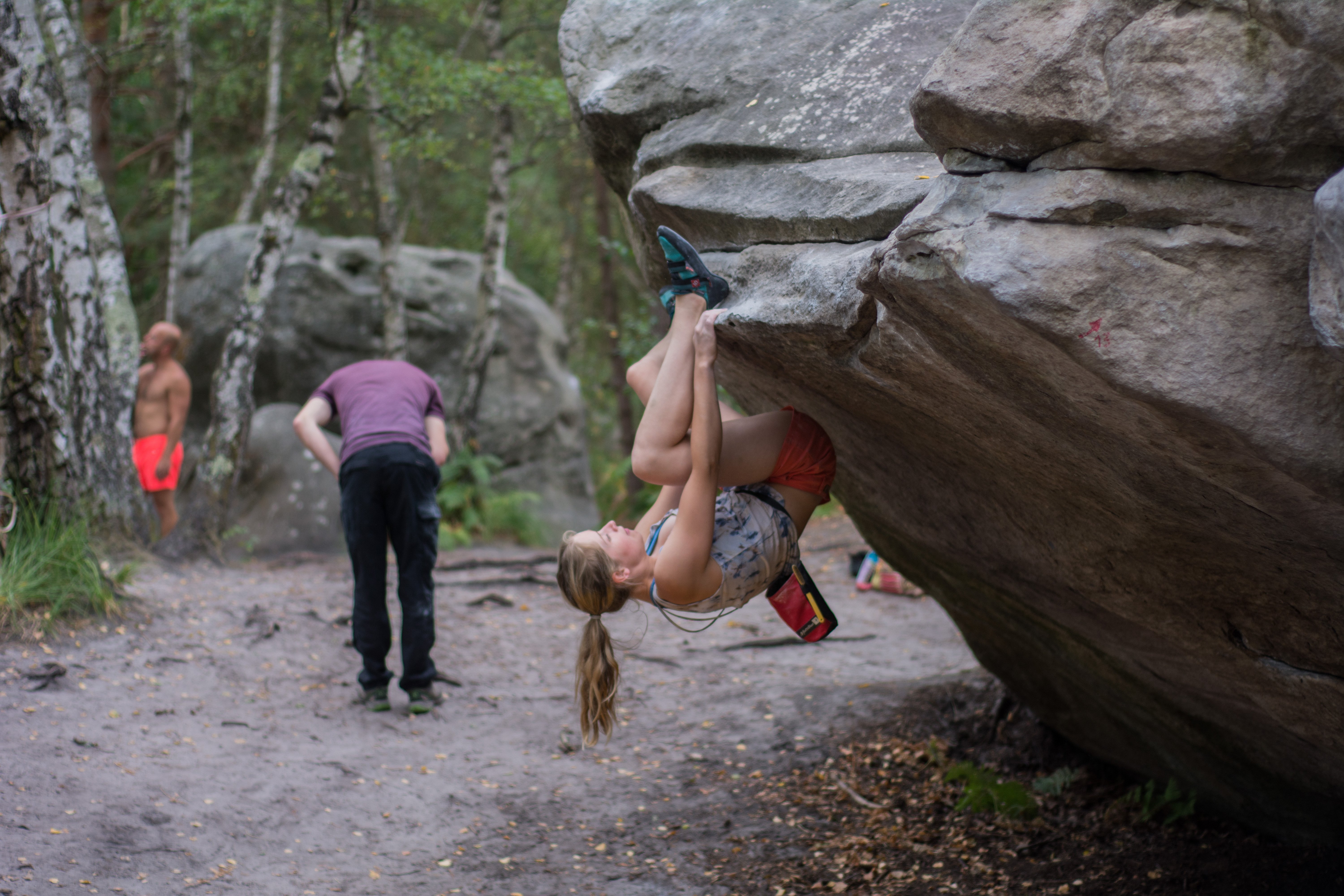 Each year it gets harder and harder to leave Font!!!!

Fontainebleau is an accidental annual trip for the ATS crew. It started 3 years ago when Pymn, Taz and I were invited by Seb to join him and a few mates out there for a long weekend. It was a wild weekend of cheap energy drinks, doing shots out of a grenade case and our minds being blown wide open to the world of climbing. On the long drive back home we were already planning the next trip.

The second trip 1 year later, Pymn and I headed out to meet Taz and Beautiful Joe for a little longer than a week. This trip was going to be a quiet one. Little did we know, Pymn asking for a go on someone’s slackline would lead us to moving into their camp and getting shown around the forest by experts. The slackline was owned by Dennis, a seasoned Fontainebleau climber with Guru Knowledge of slacklining, Fontainbleau climbing and life. Along with the Dutch Guru, we also met his great ‘Dutchie’ mates. These guys are all about the complete experience of the woods and can make a lean-to fit for a wedding out of a bit of tarpaulin and some freshly cut trees. We also met the ‘Northerners’ (they are from Derby but anyone above Bristol are Northerners to us).  These guys crushed! They were all under the age of 19 and two of them were sending 8a! They blew us away and helped us a huge amount understanding the rock. Best of all, they were great at egging us on, and they still do.

Our third trip in 2014, we had been in touch with everyone and planned out trips to coincide. We met them in the campsite to make the mother of all camps!   Our campsite family had expanded from a group of 12 to a group of 18. This year we had pretty much the full ATS crew, apart from Angry Angus (although we did have Northern Angus).  The Northerners had brought a few more guys this time as they had just started Uni and Dennis had added to the Dutchie team. It was great to go back with new guys since we had gained such great tour guides the year before. This trip flew by as usual and the ‘Projects’ started to pile up ready for next year.

We couldn’t wait for our annual summer trip and headed out for a cheeky session over the May Bank Holiday. Whilst out there, we had the intention to make a film with our mate Joss Wild, who decided to feature us in his Film School final piece.  Unfortunately, it was very wet, but in between showers we managed to add a few more moves on some projects.

So for our fifth trip in August, Emmie, Tilly and I turned up 2 days after Pymn, Connie and Evie and Tom, Harms, Will and Mike arrived 2 days after us. By the time we arrived, Dennis had fully transitioned into a forest man and he had befriended Christophe, a friendly French man who we managed to talk to either through Tom or through extremely bad French and hand symbols. The rest of the ‘Dutchies’ turned up throughout the week. The ‘Northerners’ had turned up in mass with 25 Uni mates and had been there for a quite a while before we arrived. A few days into our trip, a lot of the Northerners went home except our original crew and we filtered back down to a smaller group of annual climbers plus some great new extras.

Down to the climbing! WoooooHoooooo FONT!!!!! Oh…

Pymn on a highball 7a, L’elephant

Fontainebleau knocks you down for sure! The heat sucks out your energy, the grades stress you out and everything feels impossible!  It takes a couple of days for you to understand the rock and maybe even longer for your body to. The open hand strength and trusting your feet on the glassiest slabs is mind boggling. Coming from Limestone crimps to Sandstone slopes feels harder than learning another language and you only have 11 days to become fluent.

This year, we worked out a new system. Climbing between 11-3 was too hot so we decided to have 2 sessions a day- morning and night. During the day we mainly eat and siesta.  We also decided to put down the guide book and choose our climbs based on looking at the rock and finding lines which we wanted to climb. That’s it now, you are involved, crack out the cheese and wine and Font has fully settled in.

We managed to get to a lot of new areas this year and some old favourites.  A few of my new favourites are Apremont and Rocher Saint-Germain the blue circuits in these areas are awesome with a fantastic range of technical slopery routes alongside some great powerful climbs too.

Of course, we visited a lot of project problems as well.  One project is a climb that I have tried every time I have been to Font called ‘Le P’tit Toit’ and this year it went down second attempt which was a massive confidence boost for me. This led me on to a massive day at L’Elephant smashing every project I had there including an 8 meter highball, a 6a, a few 6b+’s, one 6c and even sending my first 7a called ‘La Traversee du Gruyere’.

That day made it my best climbing trip to date. I celebrated the next day in Fontainebleau with a coffee and cake not expecting to climb much for the rest of the day just popping up to Bas Cuvier for a chilled one. As we walked around trying to find some nice climbs for Emmie’s DOUBLE sprained ankles to find their way up, I spotted a climb which drew me in. It was a slopery arête with one obvious break half way up. After checking it in the guidebook it had a sit start symbol and the grade of 7a. I said to Emmie ‘I will have a quick go as it will be a good project’ and the first try went very well so I had a few more and somehow managed to get it in 5 or 6 attempts! It was called ‘Langousta Royale’ and it fitted my style to perfection.

Fontainebleau Forest is so hard to leave each time but it gets even more exciting to go back!

Taken a couple of weekends ago on a beautiful sunn

I had to share this image that my good friend Angu

I never bothered even looking at 'Pandemonium' 7c+

The day we went down to get this photo of @tom__li

We had an amazing time in Scotland but its a shame

On our recent trip to Scotland, we found this incr