‘9 and a half hours! Jeez, let’s find somewhere to eat and grab a beer.’

After we got a bite to eat, we went to the train station ‘bar’ (more like a cubical where they sell €1 cans) and before we could even order from the most hostile bar women in the world…

‘Good, would you like to sit with us?’ Boom! Done. 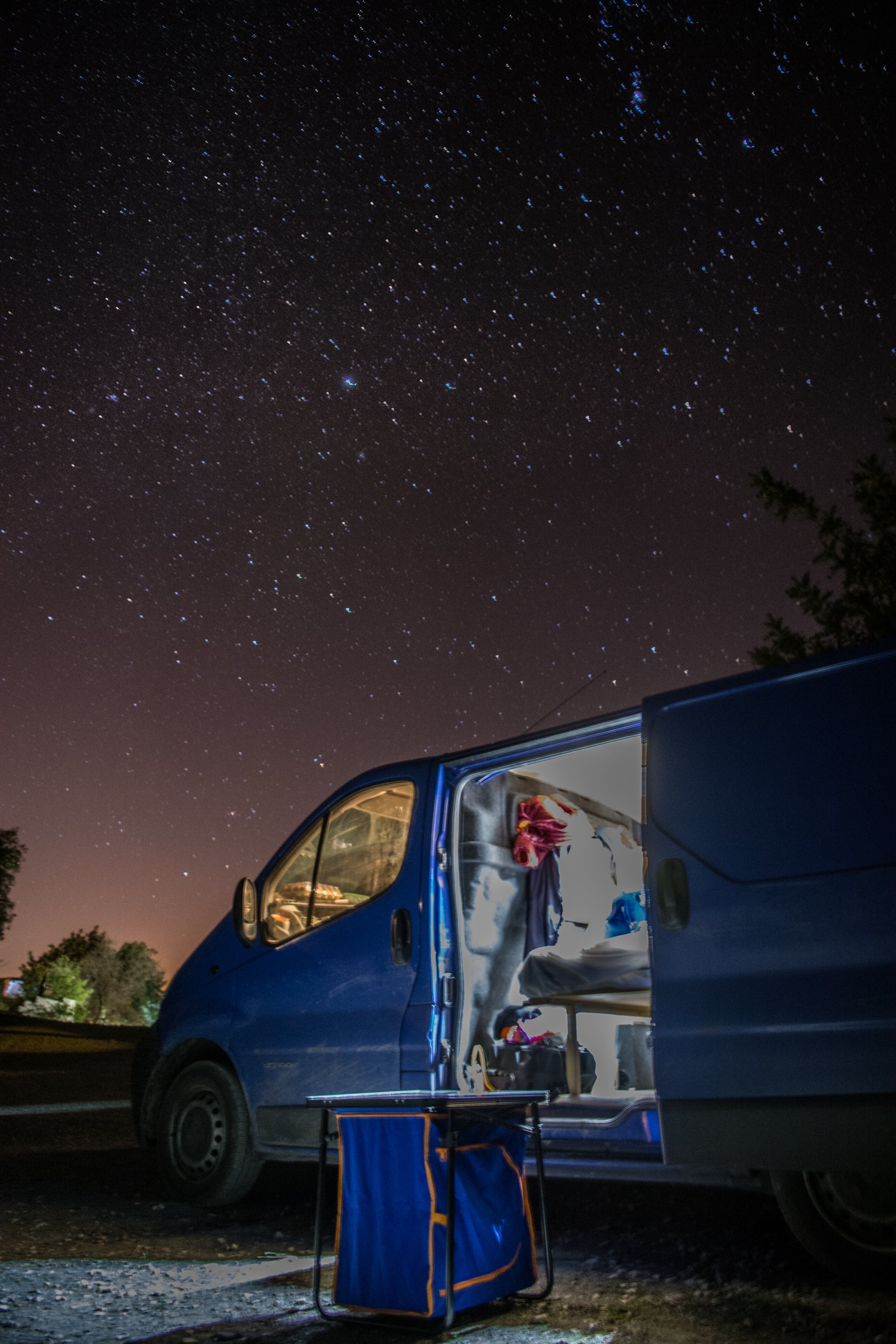 2 weeks later we were finally saying goodbye to Tom, Stu and Betty. In those 2 weeks we had all been staying down in the same car park with at least another 8 vans full of climbers. El Chorro is known by climbers as one of Spain’s most popular destinations but it was also an amazing destination for meeting people who were on random rambles around the world and happened upon it.

The beauty of El Chorro is the accessibility. You can park up in a wooded carpark right at the top of the dam that looks out over the lake and gorge. It’s great; walking distance to most climbing areas and a variety of climbers there working every grade. The only downside is that this magical car park is not a proper campsite. So that means no showers and no toilets… But every couple of days we just drove up to one of the many €9 per night hostels to recharge and have a wash.

El Chorro has a lot of accessible climbing; super easy to get to but unfortunately, this means the crags have been climbed so much in the past 30 years that they are super polished! Some of them are so polished you can see your face in them. Now this got to me a lot when we got there. I do not enjoy the extra challenge from polish. The steepness added to it as well and having no grip got me in some serious grumps. When we warmed up at ‘Poema de Roca’ on a 6b+ ‘Stronker’, I knew it was going to be a bad day. The route was completely destroyed. I have never seen rock that shiny! But still, I got to the top and I dropped down. The second route was this beautiful 7b, ‘Slimbo’, which has some lovely moves, beautiful and sequencey. Unlike the first route, I could see myself getting into it. Then I got to the last move! The only holds available were tiny crimps- that’s fine but the feet were just marble and so poor that after a couple of goes I stopped climbing for the rest of day. 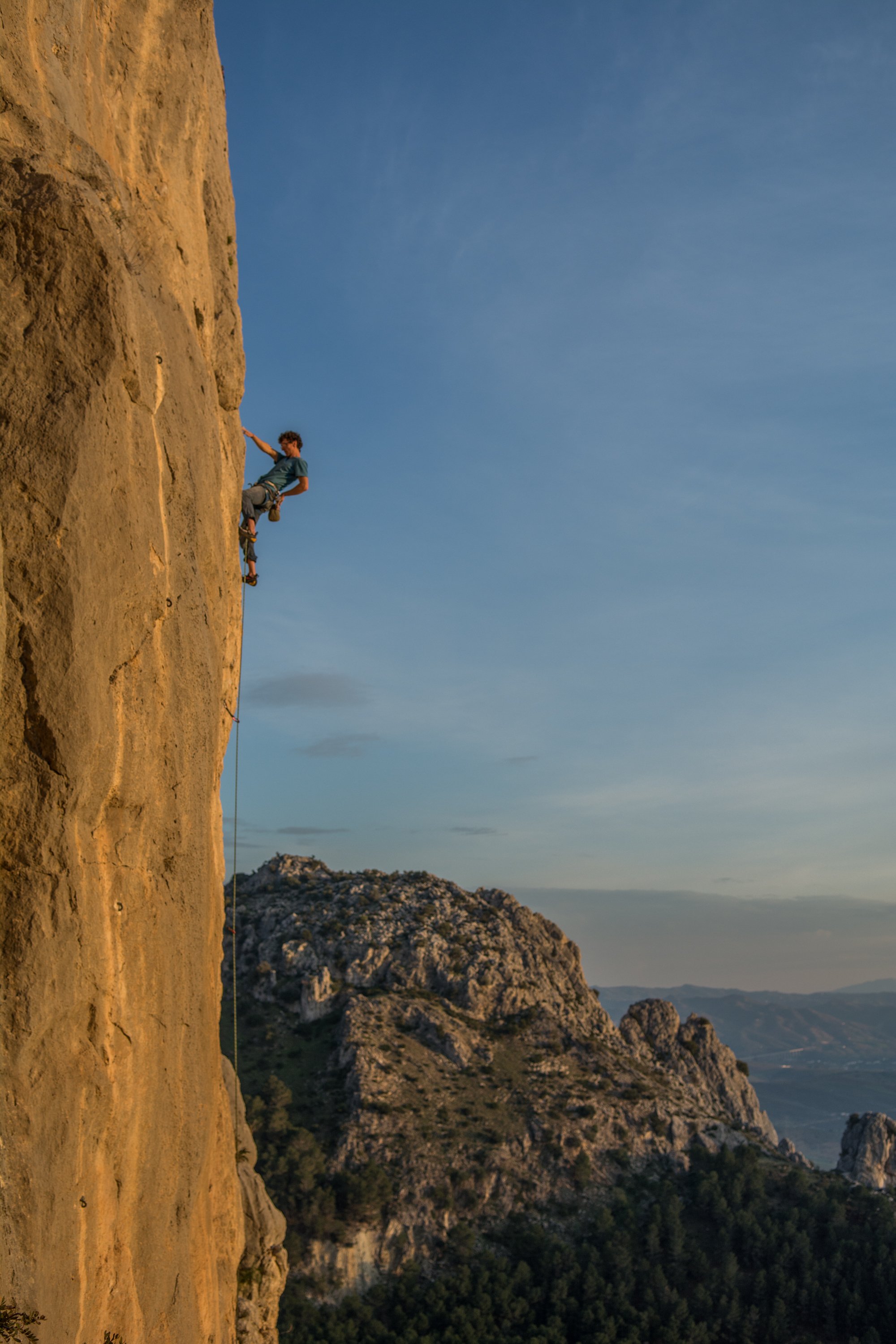 Me on ‘Arabesque’ 7a, Arabe Steps

My grump level reached a new stage when we headed for a secluded crag called ‘Canada’. The easiest route in the area is a 6c+. So, after cruising what I thought was the start I got into the super steep top on the sharpest rock possible. I can’t believe how sharp it is! After trying the top move a couple of times, I gave up and passed the torch to Pymn. He went up to give it a go but the sharp got to his destoryed fingers and he couldn’t push the route any further. I went up to rescue the gear but found out we had jumped on the wrong route and it was actually a 7b. This was another bad day and we bailed from the crag. We moved on and found a route I believed I should be able to do… Again, the polish got to me and I missed a couple of moves and I was off. Grump in full swing by now, we went to another sector which fits my wall climbing style much better. This time the routes were so close I got lost and after another climber came up beside me and figured we were sharing the same top out, that was it. After a little meltdown, ‘Just take me f**king home!’, I came down off of my 3rd route of the day- all unfinished- it was time to head back to the van and sulk. Not all was doom and gloom, having such a big, friendly group at the car park meant it was hard to stay too moody.

Arabes Steps was a crag I really enjoyed, finally! Pymn onsighted his first 7b here and I was psyched to get on the rock. The routes are much more crimpy and balancey which luckily, I enjoy. I would have liked to climb there a bit more, to be honest, but there are just so many areas!

One day, we headed to ‘Zeppelin’, a massive 10 pitch 6c+ which took a lot longer than expected. We got to the base of the crag about 1 hour later than we wanted to (classic After the Send) which meant we were chasing the sun all day and never quite reaching it. We packed too heavy, the wind was imitating Patagonia this day and the sun was at least 2 meters away at all times, we were cold… but we climbed it. Check out the video from the adventure.

Another day, we hit up an amazing crag called ‘Macinodromo’ but after the 45 minute walk in on the rail way lines and the 45 minute uphill trek on steep, loose terrain (plus throw in the cocktails from the night before), I was pretty beat before even getting there. The climbing is worth the travel for sure, but maybe don’t accept any cocktails from your friendly German neighbours if you know this is where you’re headed in the morning…

What sticks out the most for me about El Chorro, is the best climbing community I have ever come across. If you head here, everyday you will come back from a day on the rock, and the car park will have at least 10 people genuinely interested in what you have been up to. With all the campfires, music and slacklining this place is great and I am so grateful to everyone we met there. Unfortunately, I’d have to say the rock is over-climbed and personally, not my style. So, I wouldn’t choose to go back there… unless I was going solely to chill at the same car park. Anyway, we are off to Costa Blanca to meet Emmie, Alex and Tom!

Don’t forget to keep in touch through: