1 week turned into 2 weeks and then to 3 weeks! 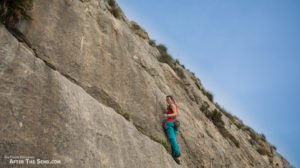 Emmie smashing out another route at Sierra de Toix.

The Orange House was our next base after El Chorro. Here we were joined by Emmie, Alex and Tom for a week. The Orange House is in the dead centre of the Costa Blanca and about 10 minutes up the road from Benidorm. It’s a great hostel with crazy views of Puig, a swimming pool, climbing movies and even a bouldering wall. I had only been there once before but had got on well with the owners and even visited Sam and Rich in Bulgaria for a climbing trip. So, The Orange House is a place I feel very comfortable and at home.

My plan was to spend the week there while everyone was in Spain and then move on. But after the first week, I had settled into The Orange House pace of waking up late, climbing all afternoon and chilling all night. It was great and I had finally started ticking off some higher grades and really enjoyed the climbing. 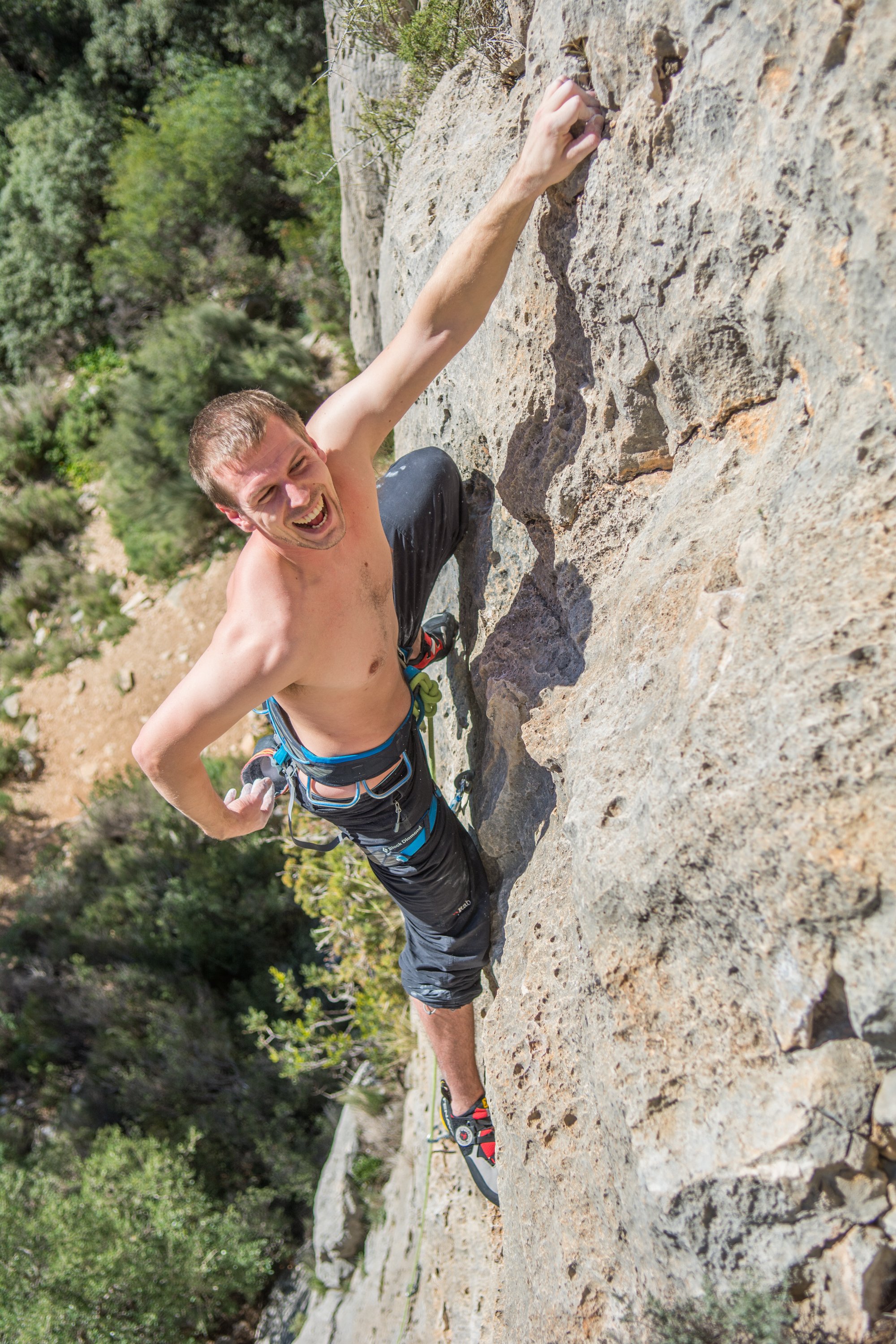 If climbing doesn’t make you feel like this, your doing it wrong!
Alex Dale in Sella

Costa has such an amazing variety of routes- from 500 meter multi pitches, to super steep and powerful 12 meter routes. Sella is one of the best crags in the area as the quantity and quality is just huge. There are 3 star routes ranging anywhere between 5 and 7b. A couple of routes which stand out from my time in Sella are ‘Cartujual’ 5+, with its perfect smooth grey rock and ‘Kamikaze’ 7b, a beautiful route with a pleasing mixture of flowstone and coral-like limestone which really make you think between moves.

We also payed a visit to the amazing ‘Magic Flute’ 7b at Bernia. It was awesome! I have looked at this line every time I get hold of the guidebook but unfortunately, this time the fiesta from the night before got in the way of a clean send. Other routes worth visiting are ‘Clive’s Redoubt’ 7a, a 50 meter single pitch at Seirra de Toix; ‘Lliberpool’ 6b+ and ‘La Bella’ 7b at Pena Roja; ‘Expresso’ 7a and ‘Batacazo’ 7c at Pinos and ‘La Paella’ 7a+ at Echo Valley. 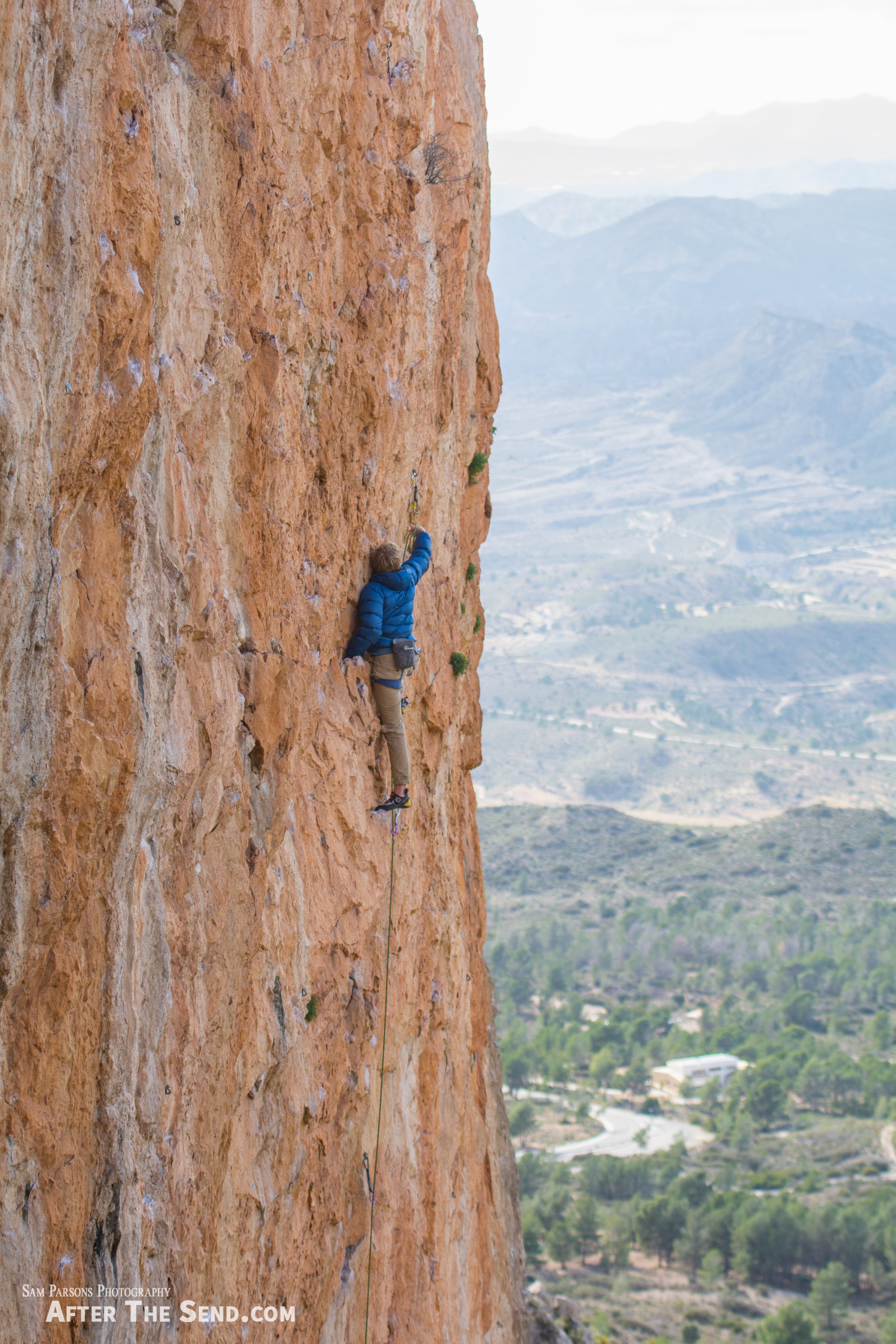 Tom on a super windy top 50 in Cabezon de Oro

The beauty of crashing at a hostel is that you meet loads of new people- not just van dwellers! Just chilling in the hostel’s living room at night, I met a group of older guys who were from all around the world and meet up especially in Costa. After chatting for a while, Pymn and I realised that we had climbed some of their routes and even read their guidebooks. They all had climbed with legends of their time and are still smashing out the routes and loving it today. It makes me wonder if I will be doing the same in 40 years? I hope so.

Along with the climbing, there is so much more to do! I spent 6 1/2 hours on the Bernia Ridge with Emmie, Tom, Alex and Pymn as we traversed, climbed and abseiled along the knife edge ridge. I also found my way on the end of a huge 50 meter rope swing in the Mascarat tunnels (video coming soon). So you have ‘extreme’ sports, you have beautiful beaches and lots of interesting friendly people… Just a few of the interesting characters we met include: an expat with a curious background of selling damaged sports cars and “supposedly” making a million before moving from London to Costa but now melts gold on a stall in Benidorm

; A Spanish man on a crepe stall who gave me a free doughnut because everyone else bought something but I didn’t. He noticed that we were climbers (not sure if it was the smell or the down jackets…) and told us he climbed. I tried to explain that we had climbed at ‘Echo Valley’ that day, at this point he ran off to get a pen and started drawing a map. I tried again to explain that we had been there but the language barrier was too much. So he carried on explaining where it was but it wasn’t the place where we had been I thought to myself ‘Nice, a local’s area!’ it wasn’t until he finished that it was clear my accent or maybe my slurring had confused the whole situation and at the end of his map he wrote ‘Hotel Bali’ and looked super pleased with himself that he helped out fellow climbers. We took the map and thanked the man for all his help- this is just another sign of the good nature climbers have. I’ve said it before, I’ll say it again- good people.

It was hard to leave The Orange House, not just because of the power, internet and showers but because they had welcomed Pymn and I as part of their climbing family. It was nice going back to a place where you are settled and with van life (although I see Rocher, my van, as my mobile home) it’s not the same as the comfort of clicking the kettle on and sitting on a sofa. So overall, the trip in Costa was a success again. I still haven’t even scratched the surface of the climbing there and I could definitely see myself heading back for the rest of my climbing life.

Don’t forget to keep in touch through: