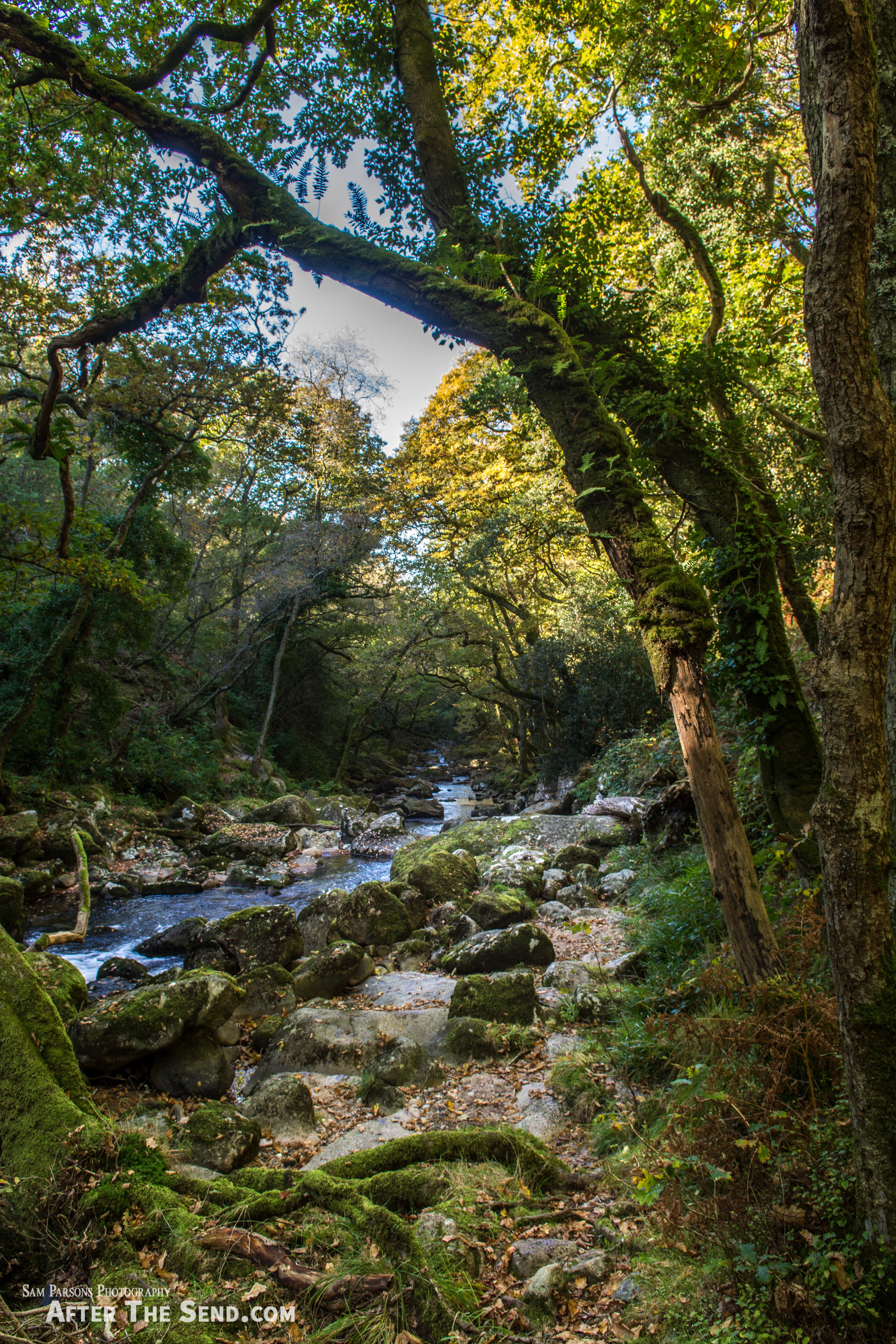 Sam had come back from his time on the road in Spain with a fresh desire to go out and place his own gear. And, following an accidental hiatus from climbing, I was itching to get back out too – my trad rack has been screaming at me from bags on my bedroom floor for months now.

The words ‘Dartmoor trip’ had been uttered a few times in our digital lives lately and a shared free weekend came up, so all that was left to do was to wait and watch the weather forecast. After a few ups and downs on that front, we looked set for glorious sunshine. Nothing could stop us now.

Illness struck me in the week leading up but with the help of around 100 oranges and some mild pharmaceuticals, I willed myself to semi-recovery. After sniffling and spluttering my way through Saturday morning, Sam and I met at Dorchester to jump in Sally (the Shed) – my LDV Maxus partially-converted camper – to venture on toward the ‘Moor.

Seemingly everyone in the south had made the same decision to head west – shocker – and so traffic was unavoidable, but some unfortunate souls had a big smash on the M5 causing a sea of gridlock around Exeter. Our cheeky workaround ended in hilarity, and more gridlock, as roadworks had shut a bridge – which Google maps failed to notify us of – which lead to even more traffic, to the extent that I managed to jump out of the driver’s seat to make use of the facilities in a nearby pub and back to the van before we’d moved an inch.

We made it to Haytor carpark and conveniently avoided the midday sun, what luck!

Rack up, walk up the steeper-than-it-looked hill (Sam you were right, I picked the wrong car park) and we were beneath the small granite outcrops of High Man. Familiar ground.

I felt more ill than I had done earlier, but after a couple V-Diff solo warm-ups I was ready as I’d ever be to tackle a repeat ascent of Letterbox Wall/Hangover (E1 5b). That was until Psyche-Out Steve came over the horizon.

“Oi there lads, d’you see the flowers on the way up..? You know if someone’s ‘ad an accident ‘ere lately?”

Psyche-Out Steve trots off with his Jack-Russel in tow after dropping a few more pearls (or is that piles) of brown-tinted wisdom… Cheers Steve!

What nerves I’d shoved to one side fleetingly tried to re-emerge but I pushed them back down by jumping straight on the first slabby moves of the route. The initial rockover spat me off onto the grass a couple times, but then it was a go. The route, and placing gear came flooding back and I felt positive about the weekend ahead. 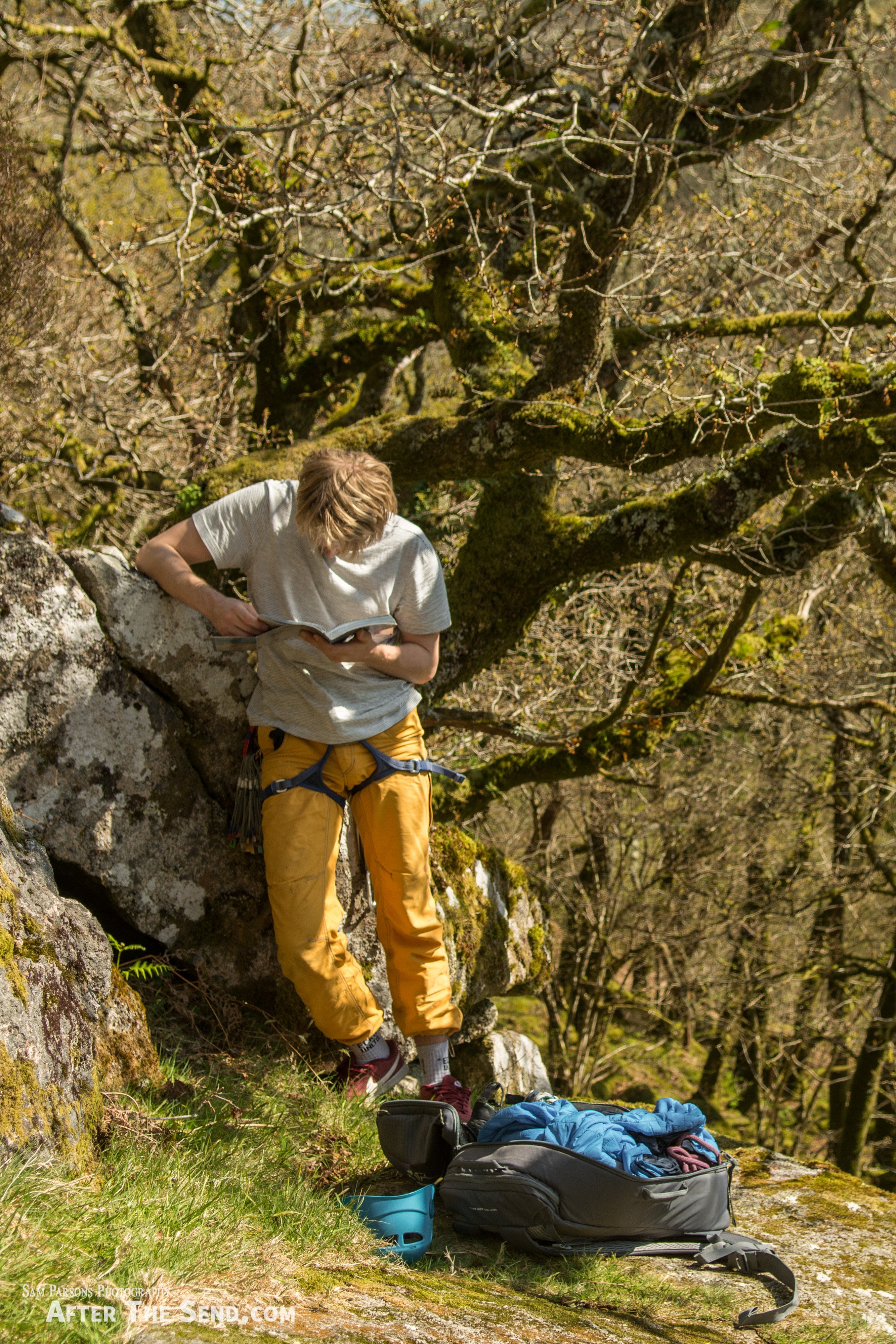 Tom working out what route goes where?!?

Sam followed suit and we were off.

Back down and Sam tied into the sharp end for another three-star route, Haggis (E1 5b). Dispatched.

Wind picking up, we headed down to Low Man where we found the only other climbers of the day. Mark, seemingly a veteran of the ‘Moor, pointed us in the direction of Aviation (E1 5b) and I recalled spotting the ‘Top 50’ mark by its name in the guide book – Aviation it was.

Sam took the lead on the first pitch – an awesome bulging flake leading to some thin slabby moves to a hanging belay on a chicken head poking out of a blanker section of wall – before I came up and past for the second.

By the time Sam’s head emerged over the last overlaps we both knew we were hooked.

We finished the day up Raven Wing (VS 4c) and Outward Bound (HVS 4c) – funky moves abound on both – as the sun set over the distant hazy tors.

Sam was enjoying the strange terrain you can find yourself immersed in while trad climbing and I was ecstatic to be back out on gear, messing around with mates, rope-work and plum placements.

Pies and pints in Widecombe-in-the-Moor flanked by the poshest of middle-aged dates night made for laughs and full bellies – one might say.

Bringing the guide book to the pub led to the decision to drive half hour into the night to the Dewerstone – never a bad call.

Well-rested in Sally to the sound of the River Plym pouring by, we awoke the next day feeling fresh. On actually getting up I realised I still felt pretty ropey – man flu is a hell of a curse.

Full of muesli and dodgy French instant coffee we slung our packs on our backs ready to trek up to the devil’s rock through the magnificent ancient woodland that surrounds the trio of outcrops that make up the crag.

Warming up on Leviathan (VS 4c) I felt tired, and on reaching the top, Sam concurred (he’d climbed the last five days in fairness).

Our designs on smashing out some of the crag’s finest E1s were postponed in favour of venturing up to new territory in Raven Buttress, seeking out some fine HVS routes.

And HVS they were! Extenders were needed in abundance and the winding routes took in some proper great British trad climbing ground. So much fun!

The layered slabs and overlaps of Spider’s Web (HVS 5a) provided endless delight for Sam and me in the scorching sunshine – thanks global warming.

I love the granite of the Dewerstone and Raven Buttress had some of the best of it.

Pete – another Devonian veteran – was racking up with his friend on our return to the mossy base of the buttress and he turned our eyes to a link-up taking in the plum pitches of Silken Thread / Imperialist – another HVS 5a.

I took on the bold first pitch to a scorching belay on a sun-soaked slab for Sam to take on the hairy and unlikely-looking (for the grade) second pitch. After Pete reassured us we were on the right route, Sam pulled a great lead out of the bag to top off the weekend.

Stumbling out of the moss covered woods and back onto the Devon Expressway we had unshiftable smiles and the knowledge we’d be back again soon.