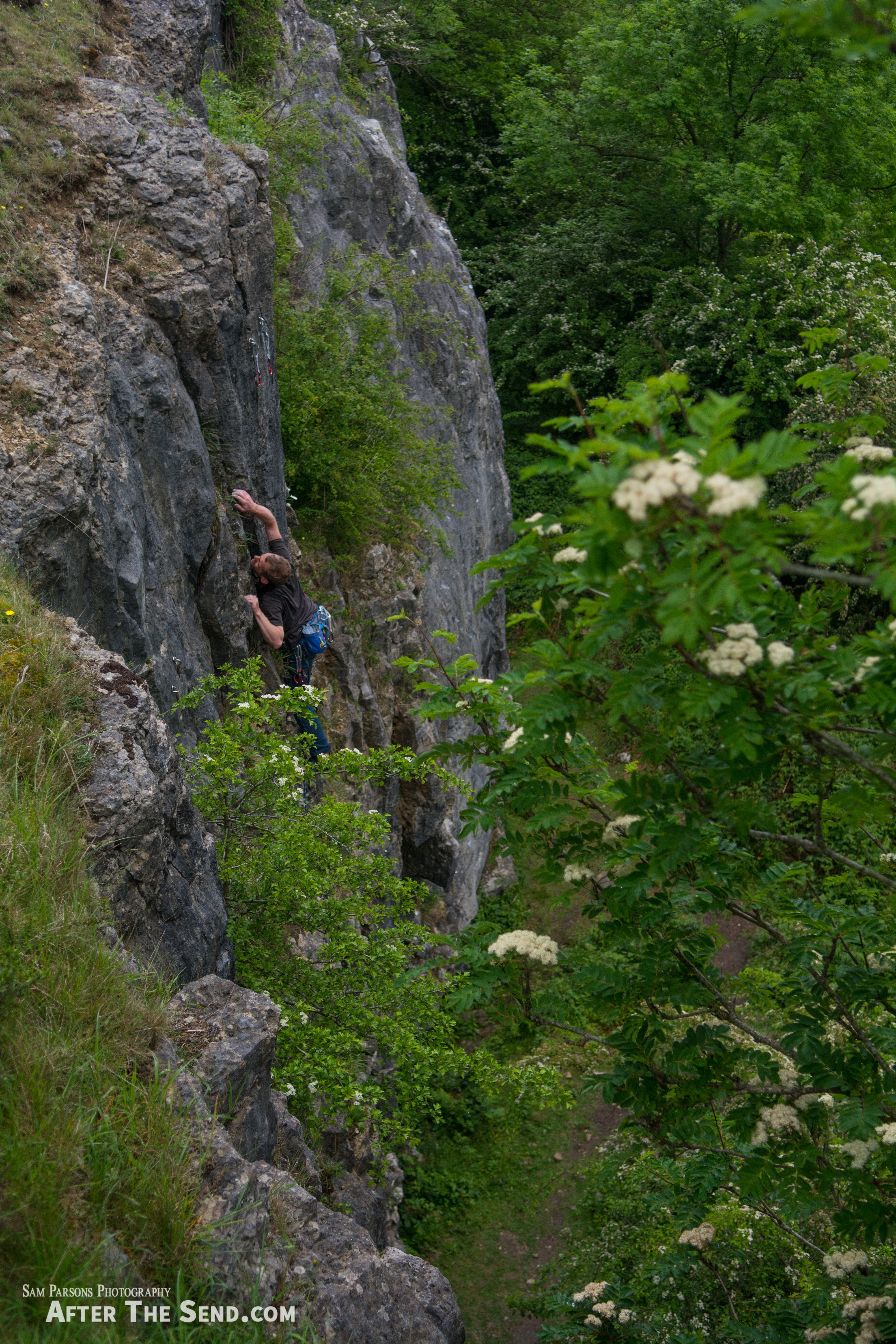 Sam and I were definitely feeling the Fontaineblues after spending nearly 2 weeks in the magical forest. Returning home to early mornings, long commutes and living an hour away from any climbable rock was less than appealing. Luckily, there’s a bank holiday at the end of May that both of us had managed to forget about! Sam had been climbing in South Wales a year ago and suggested we head there for our next ‘holiday’.

We were both utterly unprepared and packed in a rush on the Friday. On our way out we decided to stop at an undisclosed location… A quarry rumoured to be just as good as Fairy Cave but– with bolts! Despite leaving in the early evening, it still felt like the heat of the day and as we wandered around fields and woodlands climbing in the quarry began to feel impossible. After wandering through a patch of stinging nettles we finally found the entrance. We got on an awkward 6a layback arête/crack line first, ‘Never Mind the Width’. I fell from just above the 3rd bolt but fall practice is good! We carried on deeper into the quarry and found a few more awkward, bouldery lines to pull ourselves up. First crag of the holiday- tick! While it was exciting to climb somewhere new, I’d stick to Fairy Cave in the future.

We decided to drive to Cheddar Gorge for the night and camp. I had never been there before and the gorge definitely looked impressive at night. Neither of us had eaten since breakfast and after exerting ourselves trying to find the mystery cliffs we were definitely hungry. Chinese food…? Well, we are on holiday. That night there was the biggest thunderstorm we’ve heard in years. The raindrops sounded like bullets on the roof of poor old Rocher and it was even beginning to leak through our roof vent. Although we knew the storm meant wet rock in the morning it was hard to be upset with impressive thunder like that.

On our way out in the morning we stopped to have a look at the climbs in the gorge. Definitely wet. Although, there were a few eager people attempting to climb. We decided to come back at a later date and make it a multi-pitch weekend. 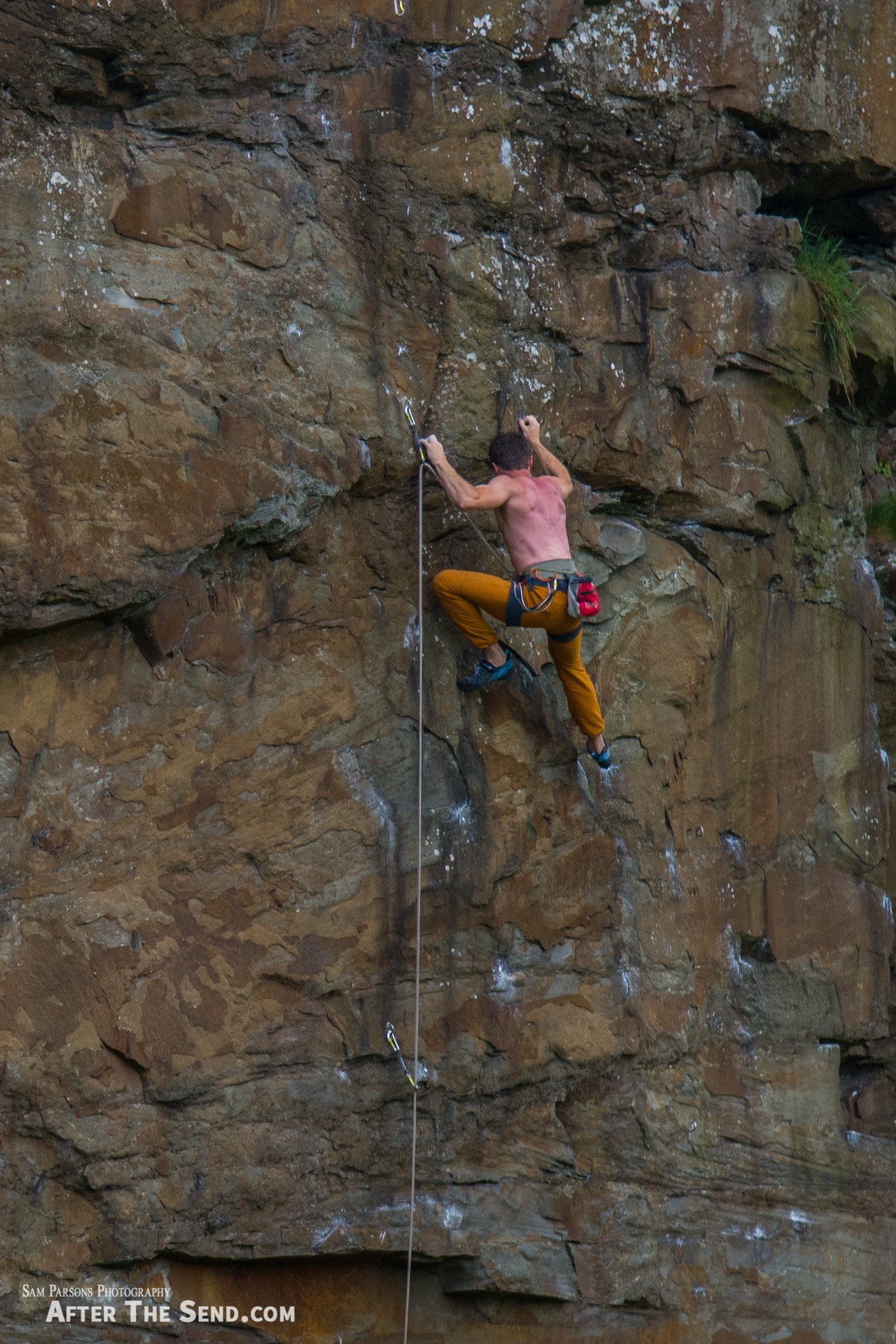 From Cheddar, the drive to Wales is only about 2 hours. Or it should have been. We made pretty decent time and arrive to Witches Point at around 1. Stupidly, neither of us had managed to get a hold of a guidebook and just assumed there’d be somewhere nearby to get one or even better, just some climbers around we could sponge off of. I had desperately scoured the internet for any available topos but managed to find the 8a exclusive topos only…  Obviously, the thunderstorm had scared all the local climbers inside and we were met with families and dog walkers only at the beach. The Heritage Centre didn’t even know that there was any climbing in the area! We hopped back in the van and called the nearest camping store.
“Up and Under. Cardiff.”
Well, at least we knew where to get one… We turned around and headed 30 minutes back in the opposite direction. Since we had faffed around enough, we asked the man in the shop where’s closest and best to climb? Taff’s Well West, he said. So again, we found ourselves wandering around through fields and woodlands trying to find the mythical crag. The ground was so wet, we sunk with every step…doesn’t bode well. Finally, we found the crag, buried deep within the forest. Not so sure that people climb here that often… Either way, it was nearing 3 o’clock now and our holiday was dwindling. We hopped on a few climbs at ‘The Slabs’. The first 2 meters of each climb was sodden, holds kept pulling off with ease and it was adventurous enough just trying to put our climbing shoes on and keep them dry. Again, not such a great day for me- for the first time ever, I fell before reaching first bolt! I’m going to blame the mud on the route… Sam however, smashed it out as always. His enthusiasm and hype meant he conquered an amazingly blank 7a+ slab, ‘Neil Kinnock’s Last Stand’.

Back at the van we decided to venture to ‘The Gap’ for our next day’s climbing. Vertical, crimpy sandstone- definitely in our wheelhouse. This little quarry is divided up in 4 different walls, each of them covered in graffiti and perfect rail-crimps. We both got on here like a house on fire and it was great to see some fellow climbers at the crag! After getting to talking with the locals we realized that Taff’s Well West was definitely not a regularly frequented crag—“Why did you go there!?”, “I’ve literally never seen any chalk on that wall…” Nevermind, we still had a good day.

So, ‘The Gap’… many an onsight (hooray!) and many a try hard grunt from me and a few more 7b redpoints from Sam. We managed 10 climbs and lost 10 finger tips each. In true holiday fashion, we finished the night with a bottle of French wine.

Monday, our final day, we decided to venture to a crag at the top of the mountain called ‘Gilwern East’. This quarried, limestone crag is home to a wide variety of grades and some decent height with a relatively short walk in. Perfect.
Not again! We opened the van and we were met with the thickest mist, you practically had to pull it apart to walk through it. But we were not perturbed and we packed our gear, determined the climb again (much to Tilly’s dismay… poor sausage was knackered). After wandering around in the fog for a while, we finally found the entrance. This place looks like something out of a fantasy. Discreetly tucked away, crag on one side, rolling hills on the other; we were psyched to climb and the rock (somehow) was dry! Our second climb of the day, ‘Inch Pinch’, 6b+ is the world’s hardest 6b+. I recommend this crag just so you can go climb this route and be just as puzzled as we were. The 3D shape of the wall and the deceiving holds definitely threw me after climbing on such lovely, crimpy sandstone. Sam managed to redpoint another 7a, ‘Superposition’ which boasts in the description that it’s nearly impossible to onsight. And to end the day, Sam shimmied up ‘Half Pipe Dream’, a super cool 6c flowstone tube.

We will definitely be back, South Wales. Our short holiday wasn’t nearly enough time and we’ve only just begun to scratch the surface. 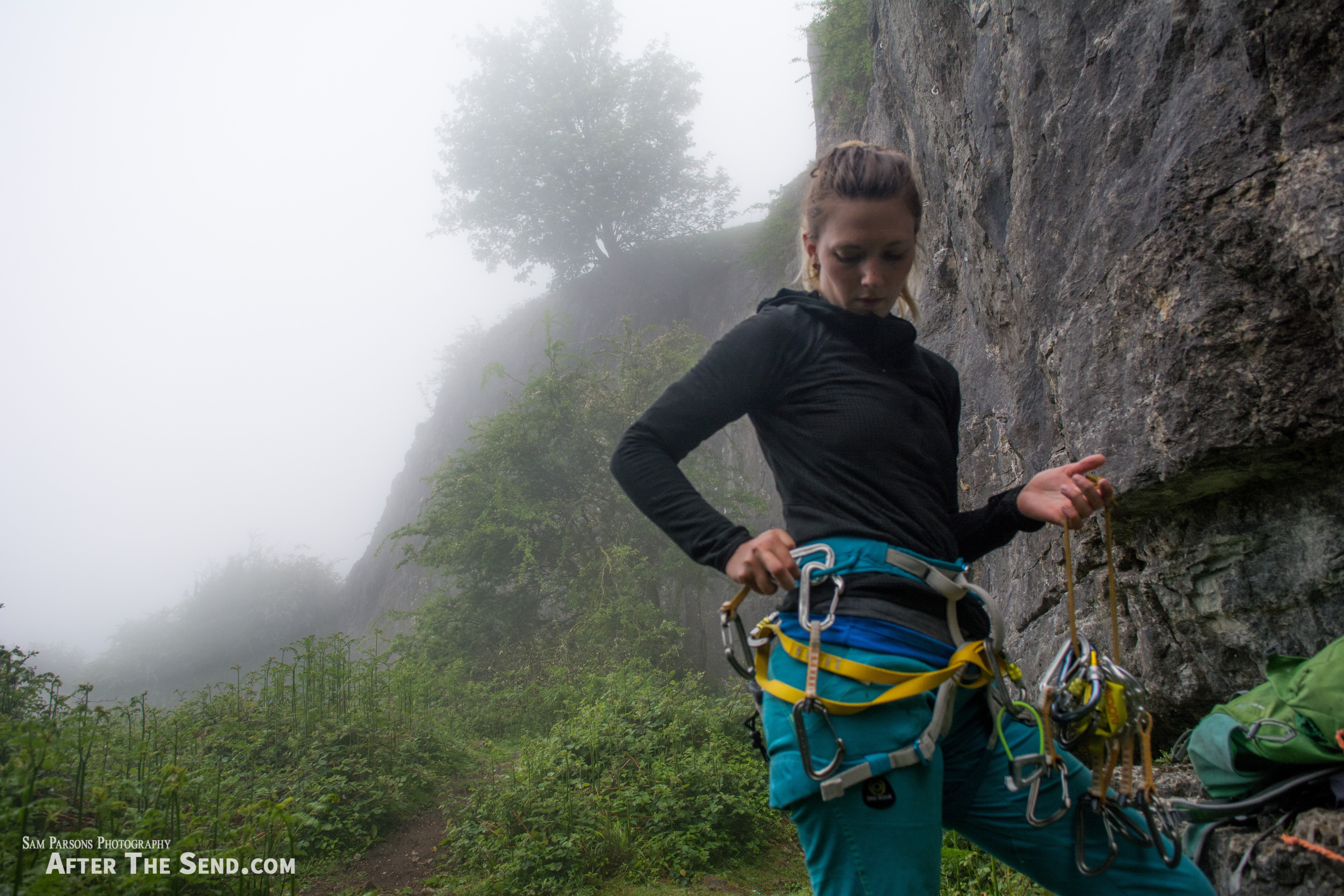 Emmie preparing in the mist.

For more on photos, videos and general climbing chat keep an eye on.

Thanks to Emmie Chadwick for the write up.