Click this link to donate to the Dorset Bolt Fund. 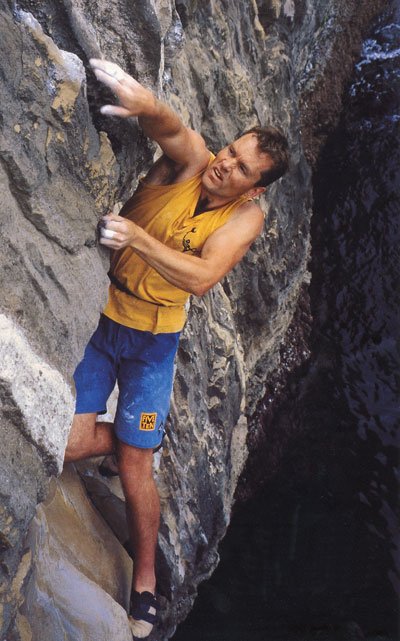 Pete Oxley without a bolt insight! I cant seem to find a picture of him on a sport route, so this will do.

Portland’s climbing history started in 1967 when Reverend Bob Stepton recorded the first routes- loose trad lines. The first 20 years of Portland climbing history were recorded to be climbed on horrible, stainless steel pegs accompanied by massive run outs. It wasn’t until 1989 when Pete Oxley put up ‘Cocteau Phenomena’ 7b using only drilled pegs that Portland gained its first sport climb.

The next step was to move forward into the U-staples bolts. Pete home-made a lot of these bolts after seeing a similar system in Spain and became the first person to place them in the UK. From this point on, every new route has had these bolts placed and Pete even started working his way through the old pegs and retro bolted all of the lines which were not being climbed due to the danger. Pete set up ‘The Dorset Bolt Fund’ and funded hundreds of routes by himself. Throughout the years there has been a strong local scene bolting over 1,500 routes on the island. On a very loose estimation, the average route on Portland has 10 bolts. 1,500 routes x 10 bolts = 15,000 bolts! How has Portland not sunk?

The Dorset Bolt Fund doesn’t just look after the 15,000 bolts on Portland but also all of Swanage and Lulworth. Along with the bolting, they help arrange crag clean ups, path work and everything else which allows us to enjoy the superb climbing Dorset has to offer.

So, let’s put things into perspective. What is needed to bolt a route?
1x Drill
Now, this isn’t your ordinary drill that you may, for example, hang a photo frame with. This special drill is called an SDS and is mainly used for masonry and anything else bad ass. Also, it is important to remember all this drilling is done on the side of a cliff so it must be wireless and have a super powerful battery, plus a spare (I believe I used all the technical terms there). So far, we are looking at around £400.

1x Glue gun + glue
You can’t just bring down a pot of PVA. This glue is special and is formed to stick to stainless steel and to rock. It is even harder than most of the rock it’s squeezed into. This costs roughly £14 a tube and the 2 part glue gun costs £25.

1x Bolt for each hole
The bolts used are twisted, 8mm stainless steel ranging from 80mm long to 150mm long. These are considered the safest option for Dorset and now only require one hole which saves our cliffs from looking like a block of swiss cheese. We’re looking at £4.20 per bolt. 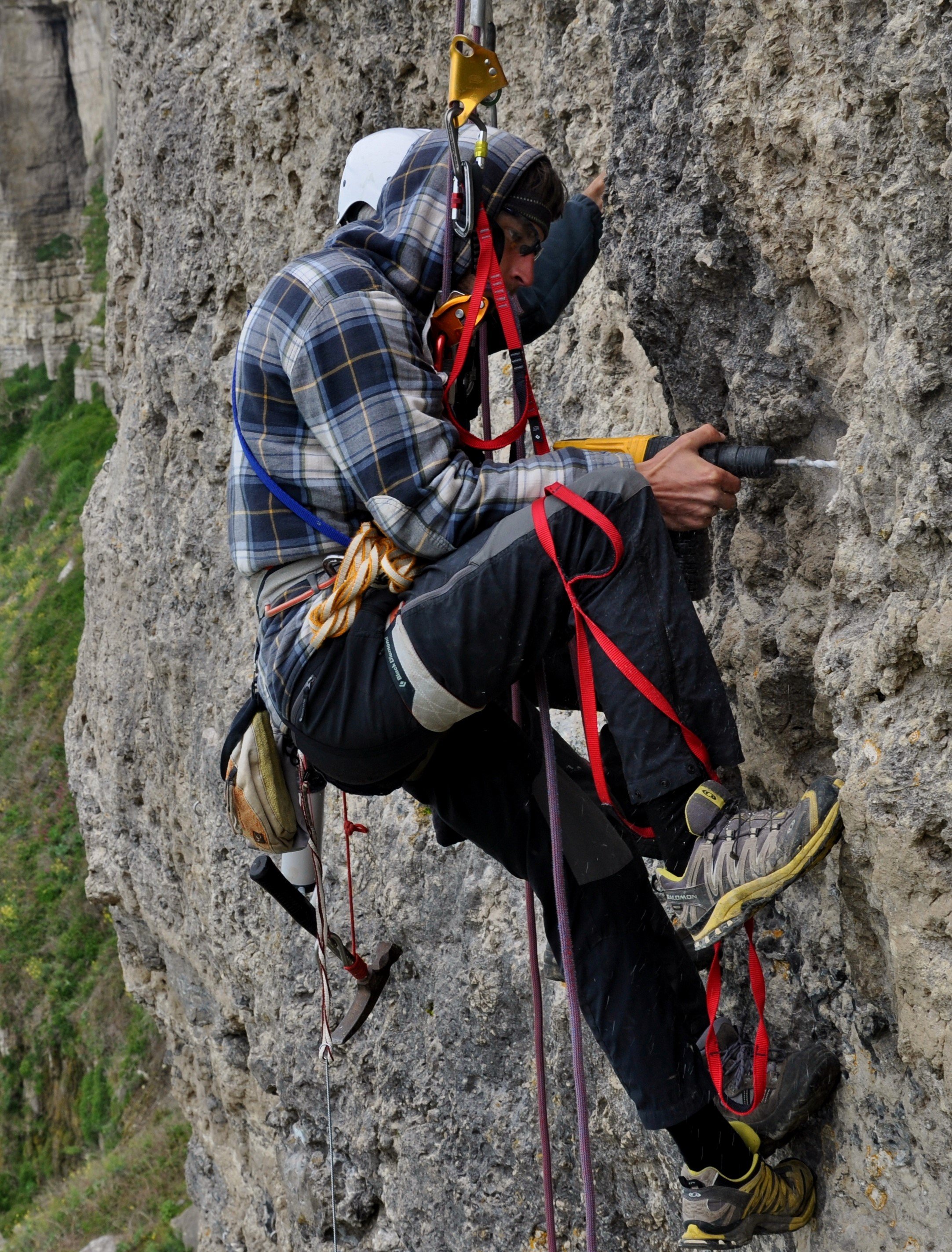 This photo is from a few years ago and was taken the first time myself and Pymn drilled the cliffs of Portland.

1x Top chain (Belay protection)
Now, when you get to the top of the route you just crushed, you will see these lovely chains hanging from two bolts with a nice big ring to poke your rope through. THESE ARE NOT TO BE TOP ROPED THROUGH! They are safe to be lowered off and top roped off but let’s limit the wear guys, just use them for lowering off and top rope through a pair of your own quickdraws. Thanks! Top out chains: £35.00 each

1x Access gear/climbing gear
We have all had an epic on a route which may only be 20 meters high but somehow takes us 30 minutes, yeah? Remember the pain from the harness? Well, let’s double that and more to bolt a route. It’s important to have a rope access harness for bolting to avoid discomfort. Then let’s take a rope or two which you don’t mind getting covered in dust, possibly glue and definitely sweat! How about some slings, some quickdraws, a locking belay, maybe a little trad gear (depending on the angle of the route), a helmet and what about a land anchor for some areas? We’re really getting into it now and looking at somewhere between £500-£1,000 or maybe more!?

1x Extras
Removing old bolts can be incredibly easy! Like way easier than you would want to know but others can be stubborn old gits. In this case, you may need a crowbar or a hammer or even a battery-operated grinder! Along with all the gear to remove the old bolts, you will need bags to carry everything down in. This includes a massive lunch and a flask the size of a tanker full of coffee. Cost for this? £who knows, as much as you like!

Add all that up, we’re looking at approximately £1,541!  That’s definitely your pocket money gone.

Now let’s have a think about how much all this equipment weighs? Even if you’re a firefighter with arms the size of Popeye you’re going to struggle carrying that down to the crag. Let alone dropping down to Blacknor via the black rope or walking up the hill from Dancing Ledge. I know I struggle with that hill carrying just a rope and 10 quickdraws.

To retro bolt a route it weighs a lot, it costs a lot and it takes a lot of time! An experienced bolter can take over an hour retroing a route, depending on the size. You must also consider the planning, trying to convince people to help, marching down to the crag, setting up and marching back. That takes dedication and love for our local area!

‘So, what can we do to help?’ I’m glad you have asked! For one, make sure to LIKE Dorset Bolt Fund on Facebook. Two, LIKE and share their posts and let’s get everyone seeing how much effort they put in. Three, if you have a spare day and are available and capable to help, make sure you get involved! Contact them now! Four, donate! They are not asking for millions (although if you have it spare that would be great) just whatever you can afford and you feel is fair.

Click this link to donate to the Dorset Bolt Fund. 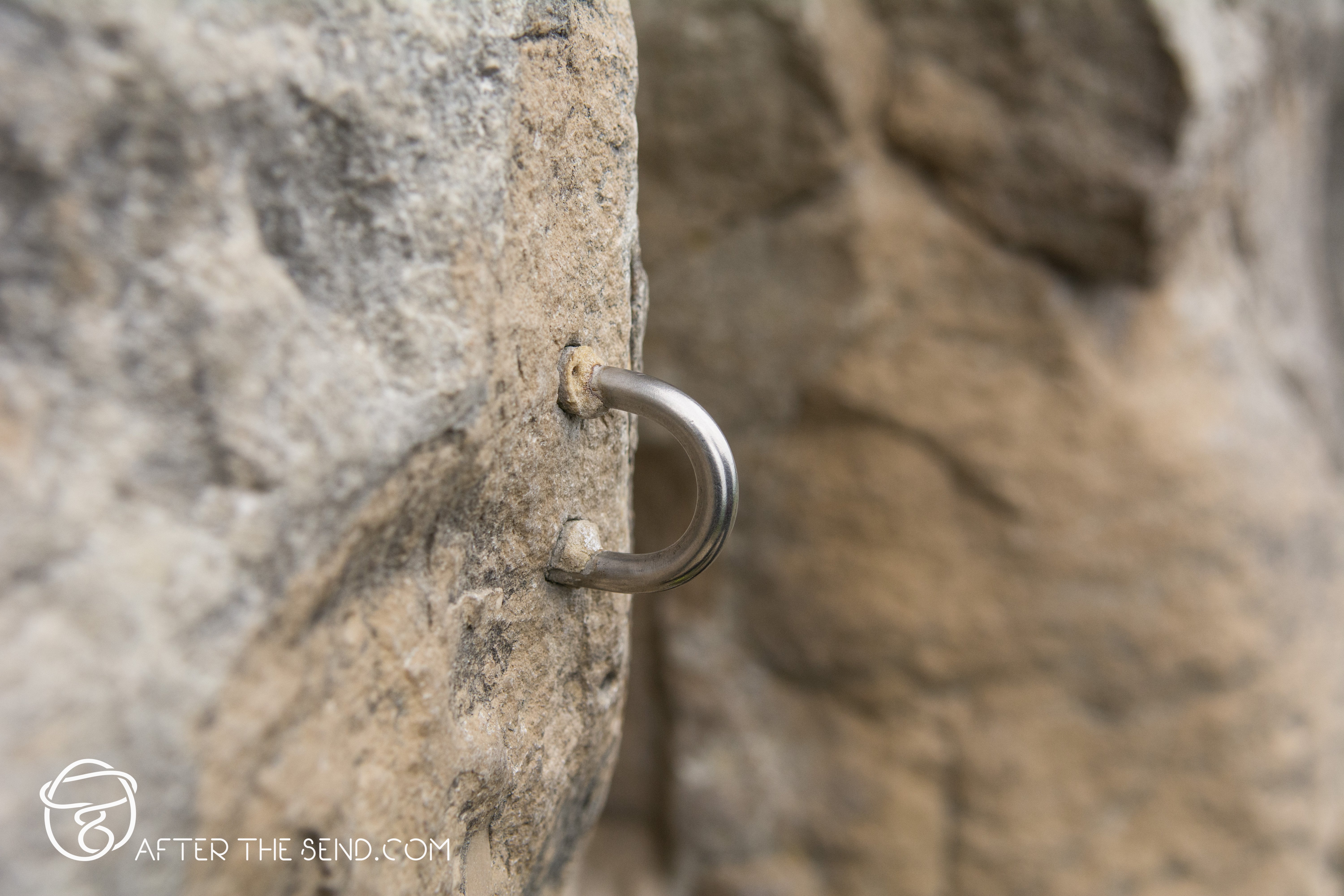