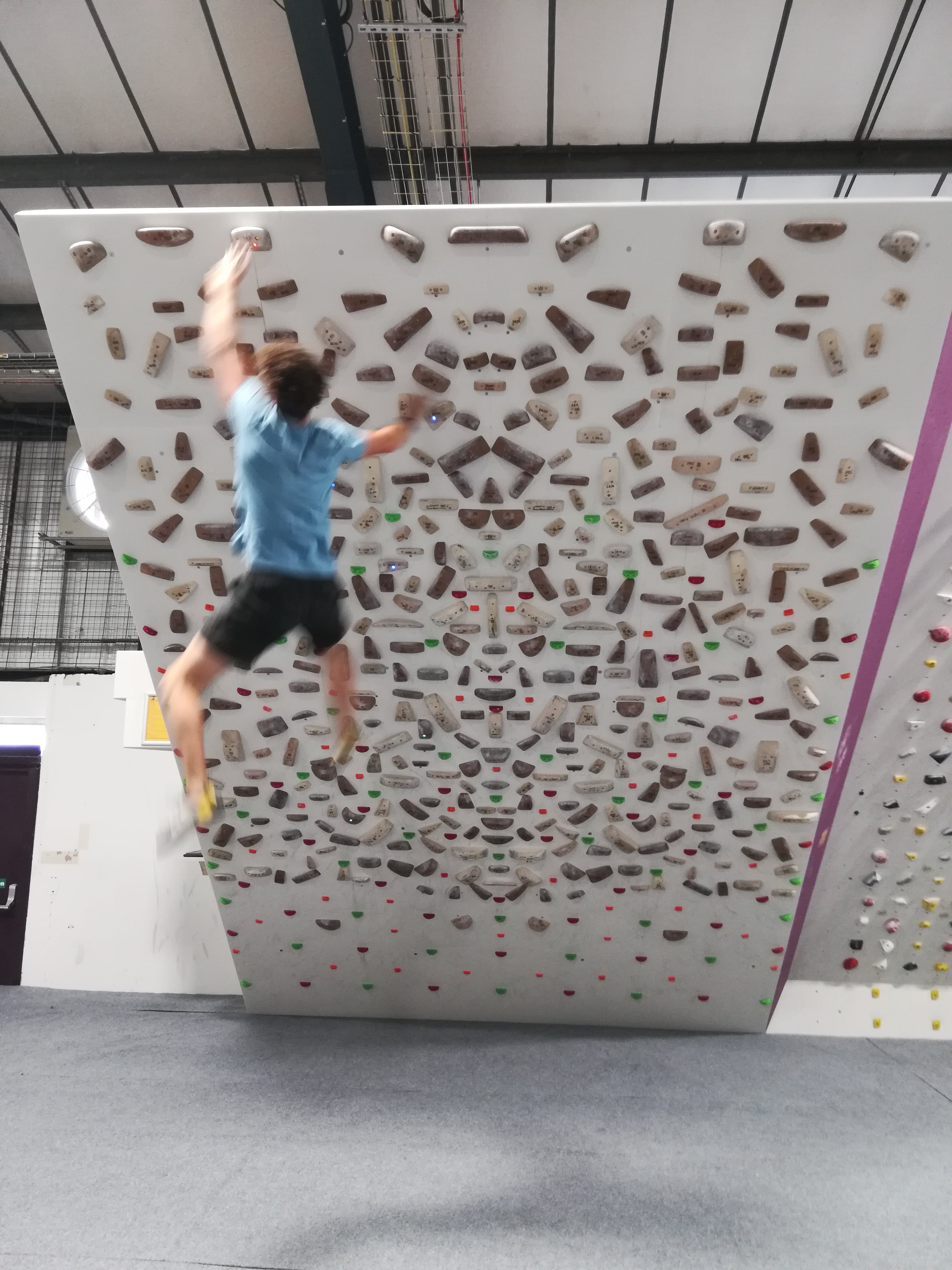 HarroWall has been all over social media since it opened in February; since we had a weekend in London, we decided to see what all the hype is about.

On the tube to Harrow-on-the-Hill tube station we did a little research and found that it is the largest bouldering centre in the UK and owned by Lakeside Climbing Centre (owners of Kendal Wall, where coincidently our friend Ben is the head setter- big up to Ben!). We knew it had links to the Vauxwall combo but didn’t realise it was owned by the tallest climbing wall in the UK as well.

The 5 minute walk from the station had us wondering “How big is this thing going to be?” We had found ourselves in quite a residential area; it didn’t feel like the usual hustle and bustle of London. We turned a corner and found ourselves in an industrial park, as you often do when going to a climbing wall. The wall was signposted clearly and was only a short walk from the entrance of the industrial park.

The induction iPads were right inside the entrance with clear, simple instructions on how to register. If you’re new to climbing you must watch a short induction video (headphones provided), however, if you’re a regular gym rat they’re happy for you to sign your life away. We looked around the modest shop, equipped with a good range of shoes (climbing and approach), clothing and bouldering gear while we waited for reception to be free. Luckily, we had ticked all the right boxes and we were allowed to climb. The gentleman on reception was friendly and smiley and had even clocked that we were far from home. As it happens, he had a ton of knowledge of our local crags, was there the weekend before and had even bagged a few FA’s down at Swanage. It’s always nice being served by a fellow climber. 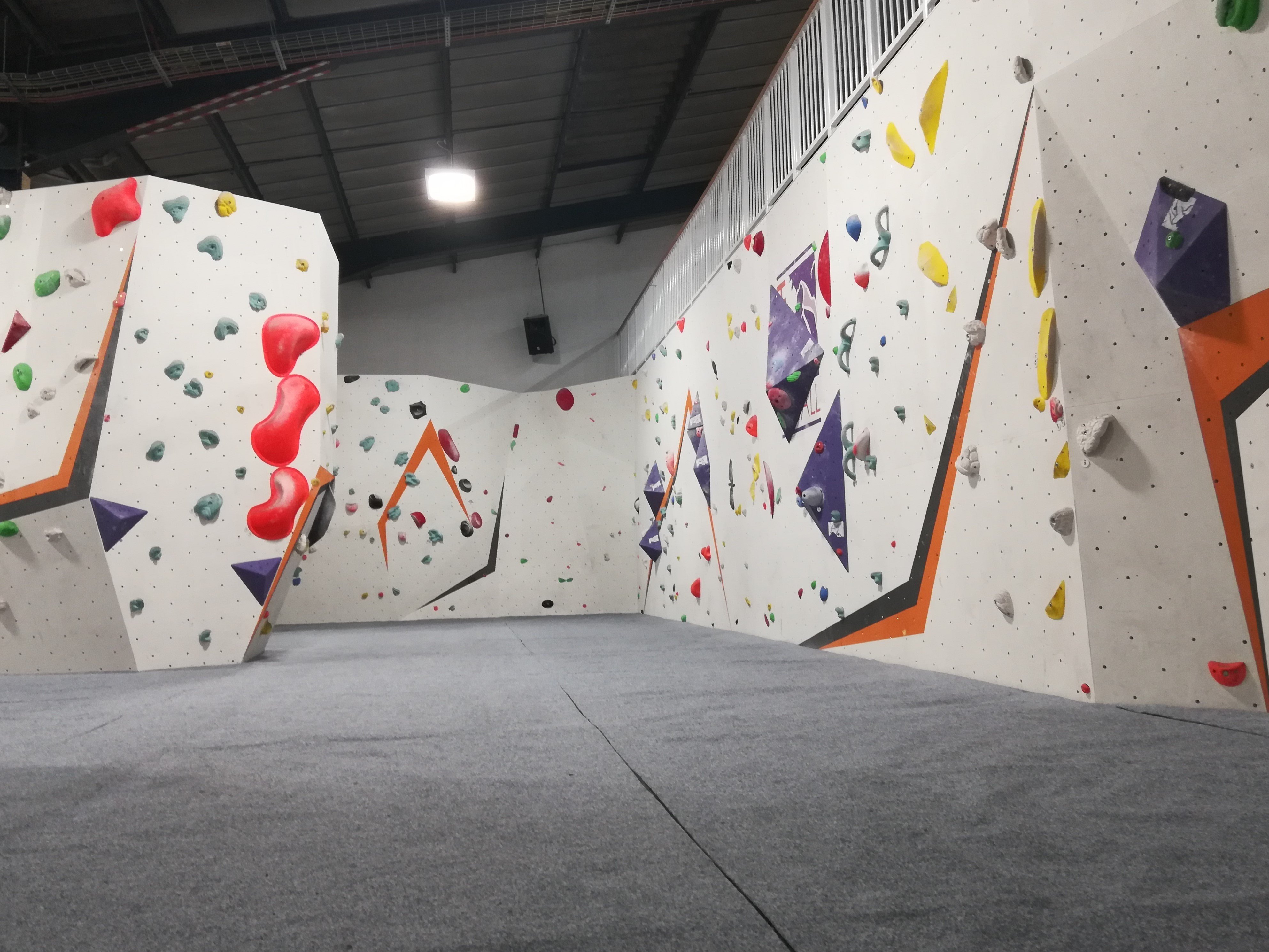 We were then given a tour of the wall, including where the café is (brilliant food, by the way), where the toilets and showers are (towels are available to hire if you’ve forgotten yours or if you just didn’t play to get that sweaty), where to get water and where to climb!

Directly behind the reception the climbing wall begins with a big competition wall, complete with every angle twice over on it and an island in front called ‘the Rhino’. Before I could get out the words ‘It’s not as big as I thought it would be…’ the tour guide says ‘This is just a quarter of it!’

After the comp wall, there was a 40-ish metre traverse wall which linked the two massive units. On one side they have a Krazy Kong set up (this is essentially the same as a Clip n’ Climb, fun climbing challenges aimed towards kids) and another 10 auto belays with 7 meter high routes. HarroWall is also home to the biggest indoor caving system in Europe and an additional dragon themed hard-play area. Another part of the wall, aptly named the ‘Font area’ is comprised of more flat walls, slabs and islands. The 10 meter 60 degree overhanging roof is tucked in the corner with a floor that follows the area providing 10 meters of safe steep climbing.

Tucked behind the comp wall is an area double the size made up of tons of islands with huge prows, steep sides, slab sides and everything else you can imagine. The training area is spread between a mezzanine and the back wall. Up on the mezzanine there is a scaffolding structure for pull ups, flags and TRX. Additionally, it has a variety of weights, rings, yoga mats, foam rollers, skipping ropes, rowing machines and scales. The back wall of the training area downstairs includes a Lattice board (free to use), campus board (4 different sized rungs), a huge circuit board, a splatter board, a moon board and then a digital training board (with options to set up your own route or follow those set by other climbers). There is an additional mezzanine area where yoga classes are regularly held.

One thing which really grabbed our attention was the quality and variety of holds. This is something we have noticed smaller walls struggle with. Probably because climbing holds don’t come cheap! But by the looks of this place, they were not short of funds. The routes are set brilliantly and after following them on social media for a while, it looks as though they are reset fairly regularly. The set was well varied and catered to every style and difficultly. Grading systems were displayed clearly in each section of the wall and start holds were clearly marked with ‘S’ tags.

This wall is fantastic in every way. The only thing I could moan about is that it isn’t closer to where I live. This place is going to create some super wods and a great scene. Thumbs up for HarroWall from the After the Send team. We can’t wait to see you again in October!